Editor’s note: This story was updated December 31–January 1 with dispatches from astronomy writer Lisa Grossman, who was at the Johns Hopkins University Applied Physics Laboratory in Laurel, Md., with the New Horizons team.

The last best view of Ultima Thule that New Horizons sent back before last night’s flyby gave a rough view of the object’s shape. It revealed an elongated, bowling pin–like shape, team members announced at a news conference this morning.

That shape, plus a new sense of the object’s rotation (shown at right in a sequence of three images taken by New Horizons), helped solve one big pre-flyby mystery: What was going on with Ultima Thule’s brightness? The team was pretty certain that Ultima Thule was elongated and must be spinning, which should have made its brightness appear to vary over time from New Horizons’ point of view. But it didn’t.

Before the flyby, team members speculated that New Horizons was seeing Ultima Thule along one edge, and the object was spinning in front of the spacecraft like a propeller. The best pre-flyby images seem to confirm that view, Weaver said. “That explains everything.”

It’s still not entirely clear whether Ultima Thule is a single object with two lobes, or two objects orbiting each other extremely closely. But principal investigator Alan Stern of the Southwest Research Institute in Boulder, Colo., is betting on it being a solitary world.

“If it’s two separate objects, this would be an unprecedented situation in terms of how close they’re orbiting to one another,” Stern said in the news conference. “That would be spectacular, and I’d love to see it, but the higher probability is a single body.”

If Ultima Thule is a single, two-lobed body, it could have formed in a slow-motion collision between smaller objects in the solar system’s distant past. More high-resolution images will be downloaded in the next few days to help clear things up.

“This will all be revealed tomorrow or the next day,” Weaver said. “Ultima Thule will turn into a real world.”

It’s official: New Horizons just flew past Ultima Thule, the most distant object ever to get a robotic visitor. After a tense night of waiting, the New Horizons team received the spacecraft’s “phone home” signal just after 10:30 a.m. Eastern time.

“We have a healthy spacecraft,” said mission operations manager Alice Bowman, who was tallying the status updates from mission control. “We’ve just accomplished the most distant flyby. We are ready for Ultima Thule science transmission … science to help us understand the origins of our solar system.”

The team is still waiting for more details. But if all went as planned, the spacecraft skimmed past Ultima Thule at about the distance between Washington, D.C., and the west coast of the United States at 12:33 a.m. As of last night, the spacecraft was expected to arrive within a minute of its scheduled flyby time, said principal investigator Alan Stern. “I can’t remember the last time an aircraft took me across the country and was on time to within a minute,” Stern quipped.

We’re about 40 minutes away from the phone-home signal from New Horizons. Meanwhile, what’s next for New Horizons?

The spacecraft will keep looking around at Kuiper Belt objects (KBOs) from a perspective we can’t get from Earth. It might even do a flyby of another KBO, although it will never get as close to another KBO as it will to Ultima Thule.

The probe may have already seen signs of a “hydrogen wall” at the edge of the solar system. New Horizons will keep looking for the wall about twice a year.

And the New Horizons team hopes to keep watching the spacecraft until it crosses the heliopause, the boundary between the sun’s influence and interstellar space. Only two other spacecraft have done that: Voyager 1 in 2012 and Voyager 2 in December.

It’s closest approach time! New Horizons is at its nearest point to Ultima Thule, soaking up data, taking images and learning as much as it can about this space rock.

In a few hours, New Horizons will phone home to let mission control know its status and how much data it collected. And it will take six hours, eight minutes for that signal to reach Earth. If the calculations are correct (and they usually are), we’ll know how the flyby went around 10:28 a.m. later today, January 1. We’ll be with the New Horizons team while they wait for the signal. Until then, Happy New Year!

We’re getting closer! Right now, New Horizons is 149,000 kilometers from Ultima Thule, with just under three hours until closest approach.

The New Horizons hazard avoidance team — nicknamed the “hard hats” — spent weeks before the flyby looking for rings and other hazards around MU69. Hitting a dust particle the size of a grain of rice could cripple the spacecraft.

With the path clear, the team announced December 18 that New Horizons would target a closer approach to Ultima Thule rather than on one three times as far away.

At its closest approach, New Horizons will fly about 3,500 kilometers from the space rock’s surface — about the distance from Washington, D.C., to Las Vegas. That’s 3.5 times closer than New Horizons was to Pluto in 2015.

NASA’s Deep Space Network of radio telescopes spends most of its time listening to spacecraft. It will receive New Horizons’ all-clear signal tomorrow morning, after the flyby. But nearly two hours ago, two of the DSN’s telescopes — Goldstone in California and Canberra in Australia — sent a signal to New Horizons. At about 6:15 p.m. Eastern time, the telescopes beamed a strong radio signal at Ultima Thule.

“We’re shouting as loud as we can in hopes New Horizons will hear,” says New Horizons deputy project scientist John Spencer, of the Southwest Research Institute.

About six hours later, the signal will bounce off Ultima Thule and hopefully be picked up by New Horizons’ Radio Science Experiment, or REX, just after the spacecraft has flown past. If it’s successful, that radio signal bounce could penetrate a few centimeters into Ultima Thule’s surface, giving scientists on Earth a unique view of the object’s shallow interior. “It’s a long shot that this will work, but we’re doing everything we possibly can,” Spencer says.

The latest image of Ultima Thule gives us the closest look yet at the space rock. But it comes with some big questions.

The left picture, taken on December 30, is just a few pixels across, but it’s already intriguing. Image sharpening (right) reveals an elongated shape — consistent with the shape the team inferred from observing MU69 cross in front of a more-distant star last year.

That shape raises a question: What’s up with MU69’s brightness? From afar, MU69’s brightness appears nearly constant. That would be easy to explain if the rock were spherical — it would reflect the same amount of light no matter how it was spinning. But those few pixels show that it can’t be spherical. What’s going on?

It could be that MU69 is spinning in front of New Horizons, so that it shows the spacecraft the same face at all times, says New Horizons deputy project scientist John Spencer, of the Southwest Research Institute. “That’s our current best theory,” he said at a news conference on December 31. “It could be wrong tomorrow.”

New Horizons is 553,000 kilometers from Ultima Thule! The second of two “fail-safe” data downloads is in progress right now. This is the last communication we’ll have with New Horizons before the flyby. (You can see the status of the download on NASA’s Deep Space Network website.)

And a news briefing with several members of the New Horizons team is scheduled for 2 p.m. You can watch here:

While we wait for this afternoon’s news briefings, here are some details on the New Horizons mission and its target:

New Horizons is speeding toward Ultima Thule at a whopping 14 kilometers per second. On December 30, the New Horizons team made a two-second adjustment to the timing of imaging and data gathering the spacecraft will do during the flyby. And the first of two “fail-safe” downloads of data from New Horizons completed successfully, ensuring that some information is in hand even if something goes catastrophically wrong during the the flyby.

This was New Horizons’ view of Ultima Thule on December 24: 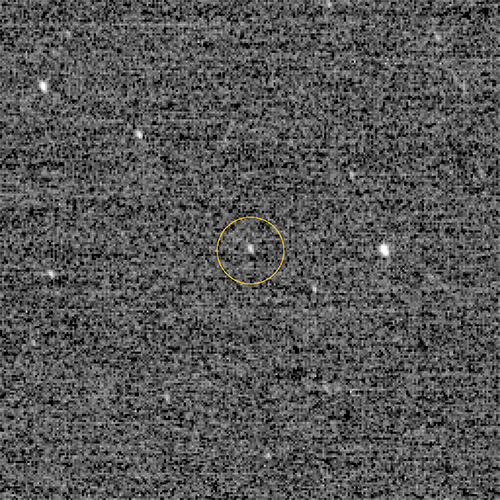 The image is a combination of three 0.5-second-exposure images taken using the highest resolution of LORRI, or the Long Range Reconnaissance Imager, on board the spacecraft.

The last images that New Horizons sends home before the flyby will show the space rock as just five to seven pixels across — but that may be enough to answer some questions about Ultima Thule. For example, it’s about 30 kilometers wide, as far as we can tell — but we don’t yet know if it’s a single object or two objects orbiting close to each other. And it doesn’t seem to have rings, but it’s not crazy to think it might, even though it’s tiny. Asteroids Chariklo and Chiron, and dwarf planet Haumea all have rings despite their diminutive sizes.

After a journey of almost 13 years and more than 6.5 billion kilometers, New Horizons is about to meet a tiny, mysterious space rock called 2014 MU69.

The spacecraft will zip past MU69, also called Ultima Thule, at 12:33 a.m. Eastern Standard Time on January 1, at a speed of 14 kilometers per second. (See our preview story for more on the mission.) The New Year’s Eve party at the Johns Hopkins University Applied Physics Laboratory will be broadcast on APL’s YouTube channel and on the APL Facebook page. (The flyby activities are also scheduled to be broadcast on NASA TV, despite the federal government shutdown.)

The broadcast will begin with a news briefing at 2 p.m. on December 31, and will pick up again with scientific lectures at 8 p.m. The countdown to the flyby starts just into the new year at 12:15 a.m. on January 1.

While there will certainly be celebration at the time of the flyby, NASA won’t get confirmation from New Horizons that all went well right away. Just as when it flew past Pluto in 2015, New Horizons will focus all its energy on collecting data as it passes by MU69, rather than transmitting anything to Earth. MU69 is so far away that it will take six hours for a signal to go from the spacecraft to Earth. And the data downlink is so slow at that great distance that it will take until about September 2020 for all the science data to return to Earth.

But hopefully, when we wake up in 2019, we’ll know that New Horizons is safe and has lots to tell us about MU69. Stay tuned.