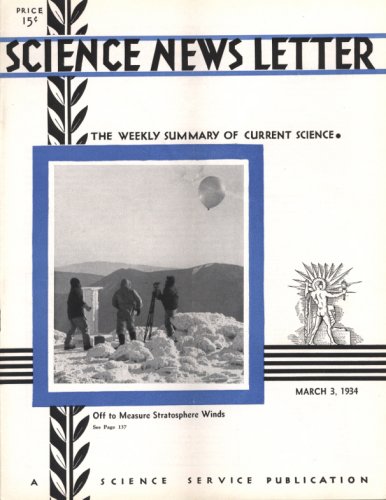 Recent calibration and test of instruments reveal that a true wind velocity of 164 miles per hour has been recorded on the top of Mt. Washington during the present occupation of the peak as a meteorological observatory. Examination of records at the U.S. Weather Bureau at Washington, D.C., shows that this is an unusually high figure in the history of weather observation.

A reading of 186 miles per hour was made on Mt. Washington on Jan. 11, 1878, with a hand anemometer that was held out of a window, C.F. Talman of the Weather Bureau states. Since anemometers of that day ordinarily read high, yet this one was not held in a well-exposed location, its reading has been accepted. It is a coincidence that exactly the same velocity was observed by a pilot balloon sent up at Lansing, Mich., on Dec. 17, 1919.

Equally high and even higher wind velocities are known to occur in tornadoes and tropical storms, but seldom does a record come through the destruction. A 164-mile-per-hour reading was reported from Nassau during a 1929 hurricane.

The present Mt. Washington record was originally reported as 152 miles per hour, but the figure was altered by wind tunnel tests on the anemometer after it has been brought down from the mountain. The readings were taken between 3 and 4 a.m. last April 5.

The front cover picture of this week’s Science News Letter strikingly pictures the method of measuring wind velocity high above the top of the mountain. A pilot balloon has just been released and will be followed with the theodolite as long as it can be seen.

Since the winter of 1932–1933 was very mild, while the current season has been extremely severe in the East, Mt. Washington may soon be reporting greater velocities than the 164-mile-per-hour figure.

A new tool for physiological and brain surgeons the precision of which will surpass the keenest of scalpels and steadiest of hands was described by Dr. J.G. Dusser de Barenne, Sterling Professor of Physiology at the Yale School of Medicine. Speaking before the Association of Yale Alumni in Medicine, Dr. Dusser de Barenne explained the technique, devised by him, whereby any number of the consecutive layers of nerve cells in the cerebral cortex, the thin outer coat of gray matter of the brain, may be destroyed at will.

This method solves one of the difficulties long encountered in studies to determine the functions of the different areas of the cortex controlling bodily activities. Hitherto investigators have not been able to distinguish between the functions of the different layers because there has been no way of eliminating one or more layers selectively. The cerebral cortex consists of only six layers of nerve cells, except in the motor area where there are five.

“Laminar thermocoagulation of the cortex,” brought about by the local application of moderate heat for a short period of time to the exposed surface of the brain, is the new technique announced by Dr. Dusser de Barenne. The depth to which the tissue is killed depends upon the temperature and the length of time heat is applied.

The first chemical proof of the artificial transmutation of the elements has been obtained by M. and Mme. F. Joliot, working at Mme. Curie’s famous Institute of Radium in Paris. Mme. Joliot in her scientific work uses her maiden name, “Irene Curie.” She is the daughter of Mme. Curie.

This achievement came as a result of the Joliots’ discovery a few weeks ago of artificial radioactivity. Alpha particles or helium atom hearts from naturally radioactive polonium, when flung at aluminum, boron, and magnesium, resulted in emissions of positrons even after the bombardment was stopped. In the case of boron, the activity continued for nearly 15 minutes. This was hailed as an important step in understanding the structure of the atom.

The positron is the recently discovered positive electron, now considered one of the ultimate particles of matter.

The theory of the mechanism of the artificial radioactivity is that the helium atom combines with a boron atom forming a nitrogen atom that is unstable and disintegrates into a stable carbon atom with the emission of a positron.