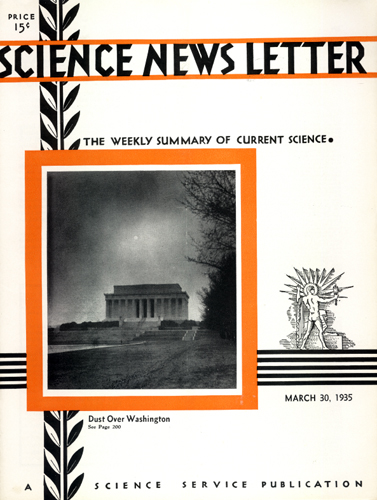 Dust storms may continue deeper into the spring and may blow up even in summer, if the Western drought area continues unwatered. There is a strip of territory, stretching from the western Dakotas southward to the Texas panhandle, that has been practically without rain for several years. Due partly to this deadly drought, partly to ill-advised plowing up of the age-old grass cover in the wartime wheat-boom days, the soil is all dust, ready for any wind.

The present season—late March and early April—is the normal time for strong windstorms. They have been blowing in the West for ages, and dwellers on the Plains have long since got used to occasional dust storms. The winds are not becoming stronger, the Weather Bureau emphasizes; there is just more dust for them to pick up. It is this overloading of the upper air with fine dust that has made it possible for dust storms to reach the East.

The dust itself is not abnormal, the meteorologists say; only it is so new to Easterners that it gives them the “jitters,” while Westerners quite literally grit their teeth and accept it as a commonplace seasonal plague.

The photograph of the dust storm approaching the Lincoln Memorial in Washington, shown on the front cover, was taken by John Hugh O’Neill, Science Service photographer.

300 GENERATIONS DESCENDED FROM ONE PAIR OF INSECTS

Three hundred successive generations of descendants of one individual have been reared during the past 15 years in the laboratories of the Johns Hopkins University. This constitutes the longest single breeding experiment ever carried out, so far as known, Prof. Raymond Pearl, noted Johns Hopkins biologist, stated in announcing its result to the Washington Academy of Sciences. Translated into terms of human generations, it would carry us back to 7000 B.C., at the dimmest twilight beginnings of the Bronze Age and before the dawn of history.

Crowding 300 generations of a living organism into half a human generation of time was made possible by the use of the little gnat-size insect Drosophila, known variously as fruit fly and yeast fly. Its life cycle can be completed in 3 weeks, instead of the human 30 years.

The experiment consisted in starting with a single normal male, mated to a female with vestigial wings. Normal males were selected from each hybrid generation and always bred back to vestigial-winged mates. In the end, the “genes,” or hereditary units determining normalcy in wings, were still there, striking evidence of the permanence and persistency of these factors in the reproductive process.

The world’s oldest discovered burying ground is in caves of Mount Carmel, Palestine. Stone Age men, women, and children more than 50,000 years ago were laid to rest there with deliberate system and care.

That human beings so early buried their dead in a fixed manner—lying on their stomachs, arms folded with hands toward face, legs doubled up—has been learned by examination of skeletons removed from the cave-cemetery, Theodore D. McCown, American anthropologist, stated to Science Service.

“Whether or not the cave dwellers believed in afterlife,” said Mr. McCown, “they recognized some ritual difference between the living and the dead.”

When discovered, the ancient skeletons were encased in limestone and breccia, which hardened about them in their cave-cemetery. Blocks containing 12 of the earliest Palestinians were cut out and shipped to the Royal College of Surgeons in London, where Mr. McCown is drilling the bones out of their matrix.