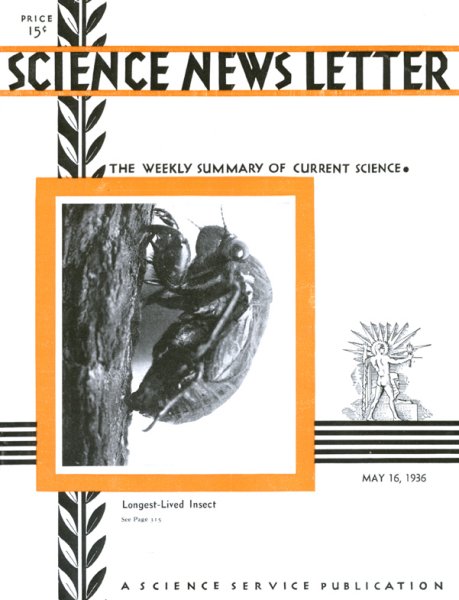 LONGEST-LIVED OF ALL INSECTS; NOT THAT OF BIBLE PLAGUE

Old-age champions of the insect world are beginning to appear in the Southeast. They will swarm in uncountable millions, over a great part of the eastern United States, before their day of sunlight and song is ended, in the closing days of June.

They are the 17-year cicadas, usually called 17-year locusts. They will appear from Georgia on the south to Michigan on the north, from Long Island on the east to the Mississippi River on the west, with smaller outlying swarms in Wisconsin, New England, and other border areas. Similar insects, the 13-year cicadas, will appear in a single compact area, where the “corner” of Mississippi fits into Louisiana. They are rather large insects, about the size of big bumblebees, with transparent, dark-veined wings.

They are not really locusts. True locusts, the kind that were one of the Plagues of Egypt, are long-winged grasshoppers, and are terribly destructive. The 17-year cicadas are strictly American insects, and they are usually harmless. The only damage they cause is by laying their eggs in the young green twigs of trees. This causes leaves to drop off and sometimes kills young nursery and orchard stock. But for the most part they are more noisy than they are economically important.

The cicadas are the longest-lived insects known. After their eggs are hatched, the tiny young ones, no bigger than ants, dig into the ground, and there they live for 17 long years (13, in the Southern species), sucking sap from the roots of trees. In the late spring of the seventeenth year, they burrow to the surface, climb up the trees and bushes, split their “baby-clothes” up the back, and emerge as winged, singing insects. They live for a few weeks in the sunlight, mate, lay their eggs—and die. The brood now emerging are the orphan offspring of the brood that emerged and died in 1919.

Of the 17-year species there are 17 broods; of the 13-year species in the South, 13 broods. Each brood has its known area, and of course its known years of appearance. This year’s brood has an unusually large area. Last year’s was confined mainly to West Virginia and northwestern North Carolina. Next year’s brood is known only from Massachusetts, Connecticut and Rhode Island.

The enormous numbers and the shrill noisiness of the 17-year cicadas, as they swarm in the woods, sometimes cause a good deal of alarm. Superstitious folk are also prone to think that the orange-red, W-shaped mark near the tip of each wing is a sure omen of war. However, since these insects appear somewhere in this country every year, and since there is almost always a war going on somewhere in the world, the cicada’s powers of prophecy are not really put to a very severe test.

The front-cover photograph of a young cicada still in his “cradle clothes” is by Cornelia Clarke.

Production of a new type of zinc-coated wire by an electrolytic process was started before a convocation of editors, metallurgists, and rural economics professors at the Cambria Plant of Bethlehem Steel Company, Johnstown, Pa. The occasion was the opening of the new unit for the bethanizing process.

The characteristics of this process, as compared with the customary method of dipping wire in molten zinc, include the production of zinc to a purity of 99.9975 per cent to increase its ductility; the use of a new pickling method for cleaning the steel wire core, using a fused salt such as sodium hydroxide; and the employment of a 40,000 ampere homopolar generator set, which is a complete breakaway from tradition.

PHYSICIANS BELIEVE CAUSE OF SCHIZOPHRENIA IS FOUND

Disturbance of part of the forebrain called the hypothalamus is responsible for many of the symptoms of schizophrenia, Drs. Isidore Finkelman and Daniel Haffron, of Elgin, Ill., State Hospital, believe as a result of studies they reported to the American Psychiatric Association meeting in St. Louis. Patients suffering from schizophrenia are for the most part out of touch with their surroundings, living in a world of their own. Their body processes go on at a slower tempo than in normal persons. Less blood circulates through their veins and they consume less oxygen. Their mechanism for heat regulation is defective and they do not show any sign of emotion.

The hypothalamus is concerned with emotional expression and in this part of the brain also are located centers for regulating oxygen consumption, heat control, and water balance. Since these mechanisms are out of order in schizophrenia, Drs. Finkelman and Haffron conclude that disturbance of the hypothalamus is a primary factor in the disease.