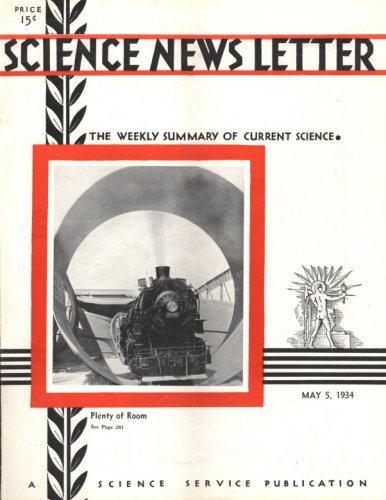 The photograph on the front cover of this week’s Science News Letter shows graphically the size of things at the Boulder Canyon project. The locomotive is passing through a section of steel pipe, 30 feet in diameter, which has been prepared for laying in the Upper Nevada Tunnel. The picture was taken by the Bureau of Reclamation, U.S. Department of the Interior, at the Babcock and Wilcox Company plant.

Diphtheria toxin, commonly believed to produce its often-deadly effects by poisoning the nerve centers in the brain, is actually prevented from reaching the brain by a chemical mechanism termed the blood-brain barrier.

The injurious or fatal effect of the toxin is due instead to its action on the nerve fibers outside the brain that control the blood vessels. This action is best counteracted by hot baths, state Drs. Ulrich Friedemann and A. Elkeles in reporting their new theory of the diphtheria toxin’s action to The Lancet.

Weather changes that visit blessing or bane on the tulip bed in your front yard and the sprouting radishes in your back garden sometimes receive substantial contributions from the remotest-seeming causes. A major volcanic eruption in Java or Alaska may fill the upper air with dust so fine that it will float round and round the world for 2 or 3 years before it settles out, and while it is aloft it helps to produce persistently chill, often rainy weather—and your garden feels the consequences.

This and other effects of great volcanic explosions, such as that of Katmai in 1912, which kept the Iowa corn crop from ripening one or two seasons later, were discussed before the spring meeting of the American Geophysical Union in Washington by Prof. W.J. Humphreys of the U.S. Weather Bureau.