By his own admission, Stefano Bertuzzi is a frequent and grumpy traveler. His trips often take him to the United Airlines terminal at Dulles International Airport outside Washington, D.C. There, Bertuzzi, executive director of the American Society for Cell Biology, long grumbled that the pictures of local landmarks lining the hallways ought to be replaced with pictures of cells.

The spectacular images that cell biologists capture in their microscopes could “really wow people and make them say, ‘Science is cool,’ ” he thought.

“One day my flight was delayed, and I said, ‘I’m going to do this,’ ” Bertuzzi recalls. He asked his staff to call the airport and find out how to mount an exhibit.

The result is “Life: Magnified,” a display of microscope images depicting cells, microorganisms and details of life invisible to the naked eye, which runs from June to November. Some of the subjects have been magnified up to 50,000 times.

Cell scientists sent in about 600 images and a committee selected 46 based on visual appeal, Bertuzzi says. Microscope manufacturer Zeiss sponsored the exhibit, organized by the cell biology society and the National Institute of General Medical Sciences.

Airports draw people from many demographics, so they are the perfect place to reach a new audience with science, Bertuzzi says. He hopes the exhibit will inspire children and maybe even a few members of Congress traveling to their districts. He’s also dreaming of similar projects to reach subway commuters and other unsuspecting audiences.

When the exhibit ends, Bertuzzi says, “I’ll be very, very sad and have to go back to looking at pictures of the Washington Monument when I travel.”

Science on the fly

Travelers can get a science fix with current displays at these airports: 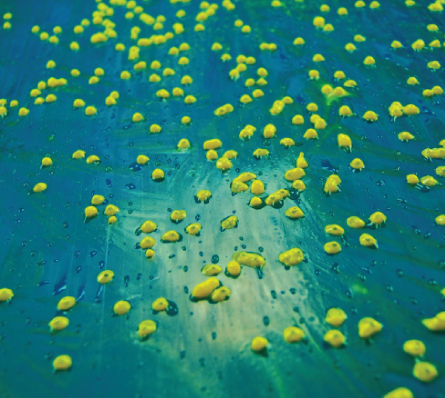 SAN: On display at San Diego International Airport are 20 microscope images in Terminal 2, a quilt depicting cells and larger-than-life resin sculptures (left) of bacteria that feed on airplane exhaust.

ORD: Near Terminal 3 at Chicago O’Hare International Airport, fliers will find plant cell walls, bee brains and other “Art of Science” images from the Institute for Genomic Biology.