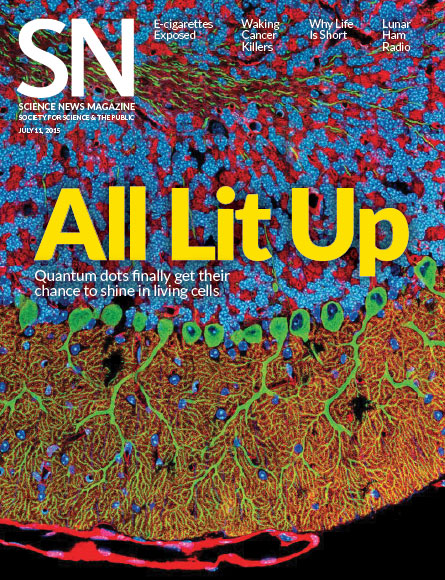 In “A biologist takes aim at religion” (SN: 7/11/15, p. 27), Bruce Bower reviewed Faith vs. Fact, a book arguing that real knowledge about the universe comes from science, not spirituality.

A number of readers wrote in to challenge one particular line from the review: “If religion is irrational, it should have been eradicated through natural selection among Stone Age folk.” William Check wrote, “Where is the logic behind that assertion? Humans are predominantly irrational, driven mostly by emotions — fear, greed, anger, hatred, lust, power. Rationality only arose as a significant force in the 16th or 17th century, and its influence is still pretty anemic.”

The use of “irrational” in the sentence is a bit of a red herring, Bower says. You can call a belief irrational if it doesn’t follow classical rules of logic, but, as a few readers pointed out, the key issue is really whether that belief was evolutionarily advantageous. Researchers don’t yet know how religion got started or why it has been such a big part of the human experience. But anthropologists suggest that ancient religious, spiritual or supernatural beliefs had big benefits for early humans, such as promoting codes of conduct within groups. Such benefits would have enhanced survival and reproduction, which might explain why religion has persisted over the course of human evolution. But it’s a complicated issue that’s still being debated, a point not well explained in the review.

Christopher Crockett’s “A loopy look at sunspots” (SN: 7/11/15, p. 32), prompted reader Bill Prince to suggest showing Earth’s diameter to give perspective to the photo of part of the sun’s surface. Here’s the image again, with Earth for scale.

“Your article on Joe Taylor neglected to mention that he invented WSJT, a software program that makes amateur radio moon bounce much easier,” wrote Eric Norris. “This has allowed many, many more hams to experience the thrill of moon bounce since smaller antennas and less power are required for success.” Norris also recalled a memorable meeting with Taylor: “I had been giving talks for years at local ham clubs and conventions called ‘Moon Bounce for the Masses,’ where I described how easy it is now to do moon bounces using Joe’s software. I arrived at a convention forum room early one morning to set up my laptop. As I was about to begin, I looked up and there was Joe in the second row! After being apoplectic for a few minutes, I managed to stammer out my presentation. Joe was gracious throughout.”

A daring leader with bad information can guide a group right into trouble. In “Bold, incorrect spiders mislead groups” (SN: 7/11/15, p. 13), Susan Milius reported that colonies suffer while spiders slowly catch on to their leader’s errors.

Readers gleefully drew comparisons between the spiders and their least-favorite politicians, public figures and other notable leaders. “I’ve had bosses like that,” quipped Breandán Mac Séarraigh on Facebook.

Others took the implications of the study more seriously. “While caution should be exercised in extrapolation to other animal behavior, the implications for the decline of human empires is self-evident. The increasing consolidation of executive control to an oligarchical group may create potential weakness if ‘bold, incorrect views’ are present,” wrote Adrian Bartoli. “One obvious current example is the decline of the United States in scientific prominence as current political and religious views toward global climate change, stem cell research and science in general have impeded progress.” But Roger Eagan pointed out that spiders and humans are very different: “Saying that a certain velvet spider has a ‘bold personality’ only confuses this behavior with human connotations of such psychological terms. Can’t we recognize, describe and name such diversity of behavior in other species without always making ourselves the measure of all things?”