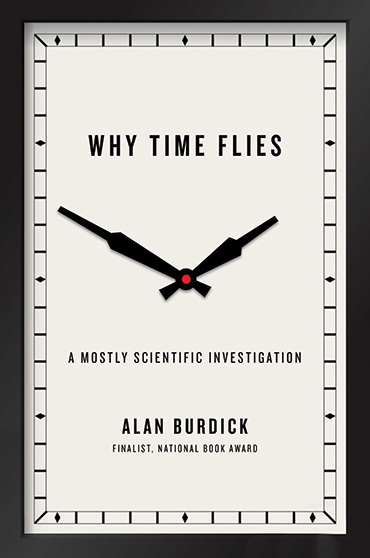 The topic of time is both excruciatingly complicated and slippery. The combination makes it easy to get bogged down. But instead of an exhaustive review, journalist Alan Burdick lets curiosity be his guide in Why Time Flies, an approach that leads to a light yet supremely satisfying story about time as it runs through — and is perceived by — the human body.

Burdick doesn’t restrict himself to any one aspect of his question. He spends time excavating what he calls the “existential caverns,” where philosophical questions, such as the shifting concept of now, dwell. He describes the circadian clocks that keep bodies running efficiently, making sure our bodies are primed to digest food at mealtimes, for instance. He even covers the intriguing and slightly insane self-experimentation by the French scientist Michel Siffre, who crawled into caves in 1962 and 1972 to see how his body responded in places without any time cues.

In the service of his exploration, Burdick lived in constant daylight in the Alaskan Arctic for two summery weeks, visited the master timekeepers at the International Bureau of Weights and Measures in Paris to see how they precisely mete out the seconds and plunged off a giant platform to see if time felt slower during moments of stress. The book not only deals with fascinating temporal science but also how time is largely a social construct. “Time is what everybody agrees the time is,” one researcher told Burdick.

That subjective truth also applies to the brain. Time, in a sense, is created by the mind. “Our experience of time is not a cave shadow to some true and absolute thing; time is our perception,” Burdick writes. That subjective experience becomes obvious when Burdick recounts how easily our brains’ clocks can be swayed. Emotions, attention (SN: 12/10/16, p. 10) and even fever can distort our time perception, scientists have found.

Burdick delves deep into several neuroscientific theories of how time runs through the brain (SN: 7/25/15, p. 20). Here, the story narrows somewhat in an effort to thoroughly explain a few key ideas. But even amid these details, Burdick doesn’t lose the overarching truth   — that for the most part, scientists simply don’t know the answers. That may be because there is no one answer; instead, the brain may create time by stitching together a multitude of neural clocks.

After reading Why Time Flies, readers will be convinced that no matter how much time passes, the mystery of time will endure.

Buy Why Time Flies from Amazon.com. Sales generated through the links to Amazon.com contribute to Society for Science & the Public’s programs.