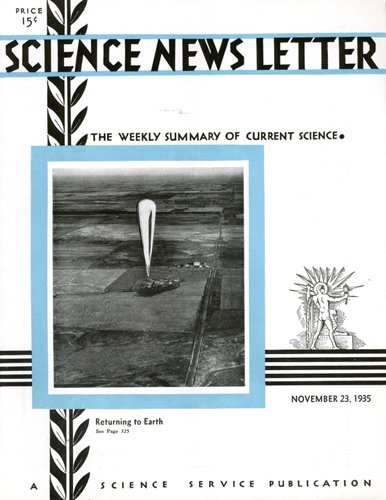 Scientific experiments performed at world’s-record altitudes brought smiles to the faces of the scientists gathered at the headquarters of the National Geographic Society during the successful ascension of the balloon Explorer II on Nov. 11 to a new record height of over 74,000 feet.

By radio the scientists not only heard what was going on in the balloon but were able to act as “cerebral screwdrivers or pliers,” as one of them put it. Dr. W.F.G. Swann, member of the scientific advisory committee of the flight, who had valuable cosmic ray apparatus automatically working aboard the balloon, so characterized himself in a two-way conversation with Capt. Albert Stevens. Dr. Swann was in New York City and Capt. Stevens was 12 miles up in the stratosphere over the now barren, winter-touched Nebraska countryside.

Deaths from malaria are increasing to an alarming extent in the United States. The seriousness of the situation is pointed out by officers of the Metropolitan Life Insurance Company, who refer to “the rising menace of malaria.” (Statistical Bulletin, Oct., 1935).

This estimate is far too low, in the opinion of Dr. L.L. Williams of the U.S. Public Health Service, who is in charge of the service’s malaria investigations. Dr. Williams estimates that there were 2 million cases of malaria in 16 southern states during 1934. He thinks the number of cases has dropped off a little since the 1934 peak, but the 1935 figures will not be available until the end of the year.

The number of cases is not known exactly, but is calculated from the deaths reported. Some authorities estimate 200 cases for every death, but Dr. Williams believes 500 to 1,000 cases for each death is more nearly accurate. Malaria accounted for 4,520 deaths in the United States during 1934, latest year for which figures are available.

The deaths and untold suffering caused by this disease can be prevented. On this point the editor of the Statistical Bulletin states:

“It is an indisputable fact that any community can now rid itself of every trace of this disease if it so desires. All that is necessary is the application of the principles laid down by General Gorgas in his work in Cuba and the Panama Canal Zone more than 30 years ago.”

High-speed radio transmission of complete facsimiles of any written, typed, or printed material will be inaugurated on an experimental, non-commercial service between New York and Philadelphia before the end of the year, General James G. Harbord, chairman of the board of the Radio Corporation of America, indicated in an address at Princeton University.

The facsimile service and television are linked hand-in-hand, declared General Harbord, for research in one aids the other because of the similar problems.

Television is nearer today, he added, than was the possibility of sending a telegram across the ocean with wires on the eve of Marconi’s first transatlantic wireless test.