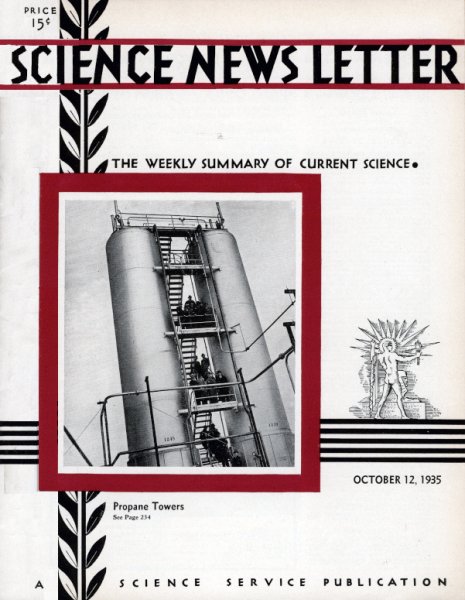 Petroleum experts of all kinds, including geologists, chemists and statisticians, are in wide disagreement over the question of whether or not there will be a gasoline shortage in the United States within the next 5 or 6 years. Each is vehemently voicing his own opinion in the matter.

So far, it has been impossible to produce it at a market price of much less than twice what an ordinary gallon of natural petroleum gasoline now costs. In other words, synthetic gasoline costs about 32 or 33 cents a gallon, although large-scale production would undoubtedly lower this figure.

What chemistry, spurred on by necessity, can accomplish can be seen by a glance at what is now happening in Germany, struggling to be free of foreign imports. Automobiles are being driven increasingly by illuminating gas, alcohol, benzol, diesel oil, and a variety of nonliquid gases, including propane, butane, methane, coke, and wood gas.

Propane and butane are available in large amounts in the United States, as well as natural illuminating gas, which is mostly methane. Both of the former are now used in liquid form as solvents to remove impurities from motor oil in U.S. refineries. Their great versatility makes it possible to use them first as a solvent and then as motor fuel, without great additional cost. These could undoubtedly be used in an emergency, although they require additional equipment to that used in gasoline-burning automobiles. Liquefied propane tanks are shown on the front cover of this week’s Science News Letter.

Frozen bread is the newest idea in the baking industry, and the most promising.

Public demand for fresh bread has kept bakers continuously working on a hand-to-mouth schedule. Now, they are trying something that may keep their product a week.

To hunt for some good way of delaying staleness of bread, the American Association of Cereal Chemists tried effects of both heat and cold.

Stored hot, that is, up toward 150 degrees Fahrenheit, bread would become stale more slowly, but flavor and color were “discouraging.”

At moderate temperatures, say 50 to 90 degrees, nothing surprising could be expected. Everyone knows how bread grows stale in ordinary circumstances.

But effects of freezing surprised the experimenters. The bread became partially stale, according to technical tests of penetration. Yet the aroma and flavor were pronounced as good as, or even better than, in freshly baked bread. At a recent meeting of New York cereal chemists, the assembled chemists were fed bread that had been kept a week below freezing and also bread baked the previous day and handled in ordinary fashion. The majority voted for the week-old product, for aroma and flavor.