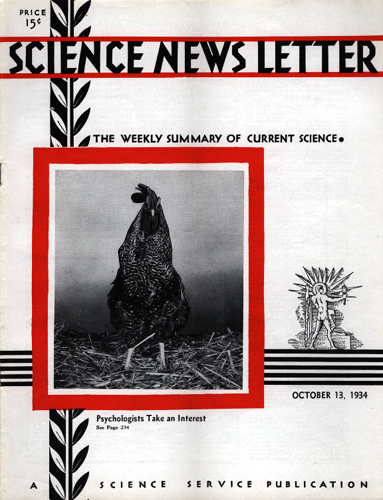 Occasionally, a human infant is so unlucky as to be born without arms. Surviving in spite of this handicap (for the human breed is remarkably tough and adaptable) these underequipped children grow up into “armless wonders,” who compensate for their lack of the normal grasping organs by training their toes to such stunts as threading needles and pulling corks. A number of these “armless wonders,” have made good livings out of their congenital misfortune by going on the vaudeville stage to exhibit their skill.

Now, these human “armless wonders,” have been joined by a “wingless wonder” of the barnyard—a rooster hatched without wings, which nevertheless has managed to grow to a lusty, crowing adulthood. And just as the armlessness of the human specimens provides them with a career, so the winglessness of this bird has carried him into the most distinguished circles, far from the quiet Kentucky hillside where he first pipped his shell.

It is not mere curiosity-seekers in a vaudeville house who have sought this unique wingless rooster. Noted scientists in several great research laboratories, at the Smithsonian Institution, at Princeton University, and elsewhere, have been glad to make his acquaintance. They have examined his anatomy, they have taken intimate interior views of him with X rays, they have made careful studies of the effects of his winglessness on his behavior. And finally, they have provided him with a suitable harem, so that they might see whether his peculiarity will be transmitted to his progeny.

Artificial production of radioactive elements useful in medicine and superior in intensity to radium was predicted by the famous husband-and-wife scientific team, Prof. F. Joliot and Irene Curie of Paris, who discovered artificial radioactivity less than a year ago.

Speaking before the International Conference of Physics, at London, the Joliots expressed their hope of producing superior radioactive elements with useful properties not possessed by the radioactive substances in the development of which the famous parents of Mme. Joliot played such an important part.

These powerful radioelements that the Joliots foresee when introduced into the living body must, they declared, behave very differently because of their chemical properties and the fact that they will disintegrate without leaving a radioactive residue.

This has great possibilities in medicine. It may mean a new kind of cancer treatment in which artificial radioactive substances produced cheaply can be introduced directly into the cancerous tissue to do their work, and then become harmless.

ANNIHILATION OF MATTER SEEN AS CAUSE OF COSMIC RAYS

Matter being annihilated in the heated interiors of the stars and flashing “new star” novae as the origin of the cosmic rays was suggested by Dr. R.A. Millikan when he reported to the International Conference on Physics the first details of the very high-altitude survey of cosmic rays made by the California Institute of Technology research team consisting of Dr. I.S. Bowen, Dr. Millikan, and Dr. H. Victor Neher.

Thus, in his latest interpretations, Dr. Millikan sees the cosmic rays as both the “death cries” and “birth cries” of matter. These mysterious penetrating radiations are seen as the signals of both tearing down and rebuilding of the stuff of the universe.