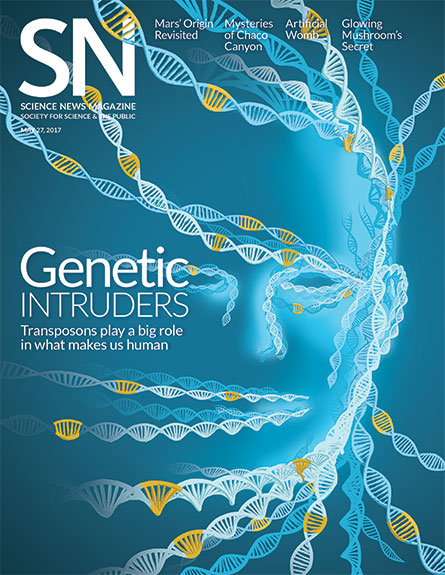 Mars may have formed out where the asteroid belt is now, far from its planetary neighbors, Thomas Sumner reported in “New proposal reimagines Mars’ origin” (SN: 5/27/17, p. 14).

Readers online were fascinated by Mars’ origin story. “There seemed to be evidence of actual seas on early Mars,” stargene wrote. “How can this be finessed into the idea of Mars living out in the freezing asteroid belt?”

“The evidence for early oceans on Mars is controversial, and this question hits on a pretty fundamental issue,” says Science News astronomy writer Lisa Grossman. If Mars formed in the asteroid belt, it could have moved inward fairly quickly, by 4 billion years ago or so — before water became a significant landscape-shaping force. When exactly water arrived on the Red Planet remains a mystery, but we know it was there at some point, she says.

There’s a lot of debate over how the planet, even in its present position, could have had a thick enough atmosphere to keep water in liquid form on the surface. “Salty water could have done the trick, keeping the freezing point low. But there’s better evidence for smaller-scale water features on Mars, like rivers and lakes,” Grossman says. “Even then, researchers don’t know how long these features were stable.”

Fragments of genetic material called transposons, or “jumping genes,” inserted themselves long ago in the human genome and have been a powerful force in our evolution, Tina Hesman Saey reported in “The difference makers” (SN: 5/27/17, p. 22).

Mars’ birth, piecing together an ancient American civilization and putting one of Einstein’s key principles to the quantum test were among the stories in the May 27 issue that resonated most with readers online. The issue’s Top 5 stories were:

1.  “Mars may not have been born alongside the other rocky planets,” by Thomas Sumner

3.  “Jumping genes play a big role in what makes us human,” by Tina Hesman Saey

Bob Bloomer asked how organisms’ molecular machinery can run smoothly when there are so many “jumping genes” around. “There must be some overriding master control nixing total destructive insertions,” he wrote.

Data from the Voyager and Cassini spacecraft suggest that the heliosphere, the bubble of particles surrounding the solar system, is spherical, not comet-shaped, Ashley Yeager reported in “Solar system bubble has no tail” (SN: 5/27/17, p. 15).

Online reader MAdScientist72 wondered how researchers know the solar system has no tail if the probes remained at the front of the heliosphere instead of traveling to the back where the tail would be. “And just what do they mean by ‘front’ anyways?” MAdScientist72 asked.

The “front” of the heliosphere refers to the direction toward which the solar system is moving around the galaxy. The “tail” or “anti-nose” (since the data suggest there is no tail) is in the opposite direction, Yeager says. The Voyager probes, stationed at the heliosphere’s front, measured atoms there, and Cassini, which orbits Saturn, detected atoms toward the back. “Researchers determined how quickly the abundance of these atoms fluctuated relative to the intensity of the solar wind,” Yeager says. If the solar system had a tail, the atoms should have taken some 20 years to bounce back after being bombarded by intense solar wind. Combined data from the spacecraft revealed those atoms rebounded after only 2.5 years, indicating a tailless system.

In the feature “In hot water” (SN: 5/13/17, p. 18), Science News reported that bacteria at the bottoms of lakes release methane, which bubbles up to the surface and adds to the atmosphere’s greenhouse gas load. Methane is produced by different microbes called archaea.