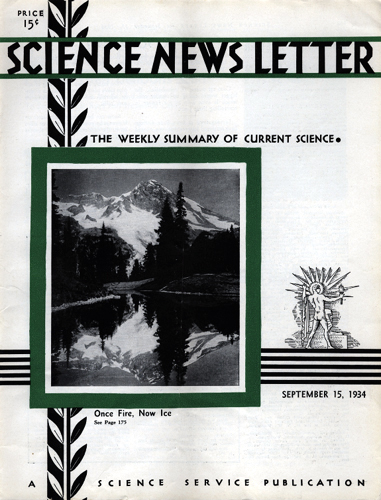 Mt. Rainier, of late familiarized more than ever to the American public through its use on the three-cent postage stamp of the new National Parks series, once held fire within, and now holds ice and flowers without. This stately, symmetrical peak, towering more than 14,000 feet over the valleys of the Pacific Northwest, is a volcano. It has shown no signs of fiery activity during the white man’s acquaintance with it, though there is an Indian tradition of a great outburst long ago.

Of such commanding height, and so directly in the track of moist coastal westerlies, Rainier is bound to bring down upon its head vast quantities of snow. This snow is responsible for two of the mountain’s great beauties: solidified into fields of ice, it feeds the 28 glaciers that forever creep down the slopes; melted into water, it makes possible the marvelous, gigantic chaplet of flowers, 2 miles wide and 50 miles in circuit, that crowns the mountain between timberline and snow line.

ROCKETS INTO STRATOSPHERE HIGHER THAN BALLOONS CAN

Development of a rocket to reach high altitudes will be continued during the coming academic year at Roswell, New Mexico, under a grant from the Daniel and Florence Guggenheim Foundation. It is hoped that high flights with meteorological and other instruments will be obtained.

The importance of the work lies in the possibility of sending rockets with instruments having shortwave radio transmitters to greater heights in the stratosphere than balloons can reach.

Such rockets will permit more exact study of the ozone layer, which is believed to exist at an altitude of about 40 miles, and of the various so-called Appleton electrical layers of gas which exist above the ozone layer for many miles and which make radio broadcasting possible. There are many other investigations, notably in the field of cosmic ray research, which it is very desirable to have carried on at heights that are practically above the atmosphere.

It is likely that most of the measurements will be made either at the highest point of the ascent or while the rocket is descending in a parachute.

Motion pictures change the moral attitudes of school children, and changes in the direction of laxer standards appear more frequently and last longer than those in the direction of stricter standards, it is shown by an experiment reported to the New York meeting of the American Psychological Association today by Dr. Vernon Jones of Clark University.

Four regular theatrical pictures were used in the experiment: “The Champ,” “Fast Companions,” “Abraham Lincoln,” and “Tom Brown of Culver.” Three large seventh-grade classes of public school children, totaling 140, took part in the experiment. Half the children were taken en masse to a theatre to see the films; the other half remained at school.

Questions designed to reveal the attitudes of the children, some of them affected by the films and some not, were asked all the children before and after the film showing, and half a year later.

The greatest changes in attitude were in connection with those attitudes affected by the pictures shown, and in the direction to be expected from the nature of the emphasis in the picture.

“In the film, ‘Fast Companions,’ a young boy is shown stealing food on several occasions, and this is always treated with a mixture of humor and sympathy,” Dr. Jones related. “One of the items on the test was, ‘H steals something to eat if he is hungry.’ The rank assigned this item after seeing the picture changed more than that for any other item in the test, and naturally, it changed in the direction of considering this behavior more excusable.”

In the film “Abraham Lincoln,” the character of Lincoln was exalted. The average rank assigned to Lincoln by the group who saw the film was decidedly higher after the showing of the film. The attitudes of the others remained unchanged.

In three out of five times, the change of attitude caused by the film was completely lost after a half-year’s time. In the others, there was partial loss or no loss. The changes that were maintained best were those in the direction of laxer standards. The change in favor of Lincoln was one that was lost completely, but on the following item the change was maintained 100 percent: “D lied out of something wrong which he did and thereby protected his family from the disgrace which it would have caused.”