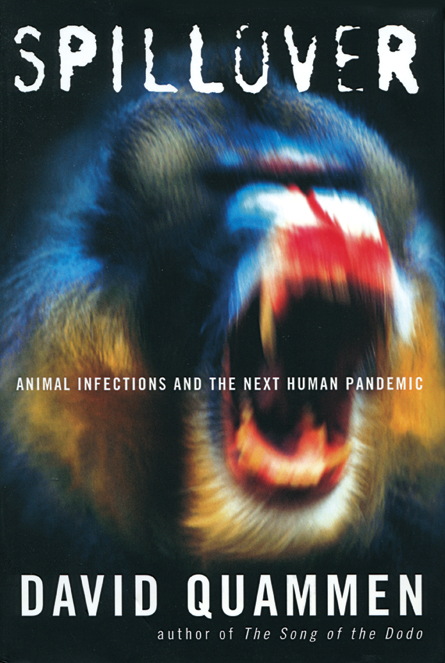 David Quammen’s book has a touch of the big, sweeping suspense novel about it. The next scary new microbe (think the SARS or Ebola viruses) most likely lurks in some animal, waiting to spill over to people. And human behavior, explosively populating the planet and pushing into remote landscapes, is speeding the arrival of the next outbreak. Serious stuff, but writer Quammen mixes gentle explications of disease ecology with deft storytelling.

There’s drama: An accidental needle prick lands a researcher in the U.S. Army’s Fort Detrick quarantine “slammer” for weeks as her husband and three-year-old son wait to see if she’ll die of Ebola. A tourist returning from Africa self-diagnoses via the Internet.

And there are characters. A former chef-trainee and furniture restorer switches to the academic study of bat diseases. A field biologist surveys the wildlife in forests in Central Africa by hiking through them for 2,000 miles.

Some of the diseases Quammen discusses have already gotten a lot of press, but he digs up lesser-known details. When he talks to Ebola researchers, they rail against sensationalized public expectations of liquefying organs and tears of blood.

As he worked on the book, Quammen writes, people would ask him, “Are we all gonna die?” Yes, he answers, but probably from something more mundane than a new virus.

There are doomsday scenarios, though. An ecologist studying nucleopolyhedrovirus in gypsy moths (which really does liquefy organs) shows that although the virus isn’t likely to jump to people, its outbreaks show how particular disease dynamics can exterminate a population. Predicting such a catastrophe nevertheless remains a matter of much suspense.