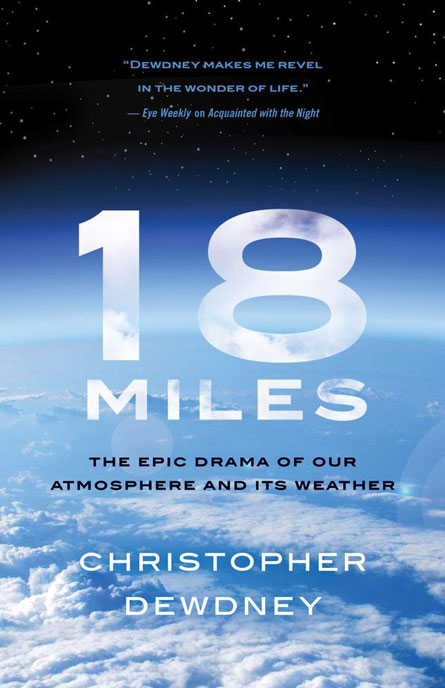 How thick is Earth’s atmosphere? Sorry, that’s a bit of a trick question: Our planet’s air simply gets thinner with altitude, fading away to nothingness somewhere far above the height at which the lowest satellites orbit. It’s a fact, though, that 99 percent of Earth’s air lies below an altitude of 18 miles. Naturalist Christopher Dewdney uses that distance as the title of his latest book, which takes a deep dive into the science behind weather and climate.

18 Miles is full of fun facts: A cloud a few hundred meters cubed contains only a bathtub’s worth of water, for instance. And the phrase “cloud nine” references a category that the International Cloud Atlas uses in its cloud classification system.

But the book is so much more than trivia. 18 Miles also contains detailed yet readable explanations of weather-related phenomena, from the annual cycle of seasons to how Earth’s rotation influences the spin of hurricanes and the large-scale wind patterns that drive such storms across long distances.

Beyond the science of weather and climate, Dewdney delves into history and culture, including recounting the evolution of weather forecasting. A few thousand years ago, the Babylonians surmised weather from observations of cloud patterns, Dewdney notes. Now, meteorologists use computer simulations to prognosticate conditions nearly a week into the future.

A chapter that chronicles a handful of occasions when weather changed the course of history, including how bitter cold thwarted Napoleon’s invasion of Russia in 1812, is particularly fascinating.

Dewdney’s stories of the scientists who teased out the details of weather and climate are equally engaging. For example, in the late 1960s, the Japanese physicist Tetsuya Fujita analyzed the damage generated by tornadoes in the United States and then invented the twister-rating scale that bears his name. About two decades earlier, he used similar techniques to study the immense destruction left by the atomic bombs dropped on Hiroshima and Nagasaki during World War II — analyses that helped estimate the immense power of those bombs and reinforced Japan’s decision to surrender.

From our planet’s formation to the present day and beyond, 18 Miles relates the epic tale of Earth’s atmosphere and its influence on our planet’s inhabitants. It’s well worth a read.

Buy 18 Miles from Amazon.com. Science News is a participant in the Amazon Services LLC Associates Program. Please see our FAQ for more details.