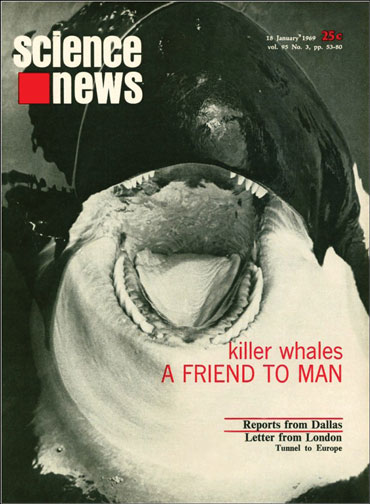 The astonishing capture [of seven orcas off British Columbia] has made possible the first scientific study of killer whales in their more or less natural environment…. There is little doubt that the animals have a sophisticated language with which they can communicate with each other, but practically nothing is known about the complexity of their speech. — Science News, January 18, 1969

The 1968 orca captures in Garden Bay opened doors to studying the animals’ behavior. Research shows that Orcinus orca family groups share distinct dialects (SN: 1/12/80, p. 21). In 2018, scientists reported recording 14-year-old Wikie imitating the words hello and one, two, three, highlighting the likely role that imitation plays in how killer whales learn dialects (SN: 3/3/18, p. 5). As for the Garden Bay orcas, they were far from the last killer whales captured. From 1961 to 2018, at least 166 orcas were caught in the wild. Another 34 bred in captivity are used for research or exhibition, according to the nonprofit group Whale and Dolphin Conservation, based in Chippenham, England.