Under the carefully styled hair of a teenager, the brain is roiling with change. Some nerve cells are killed off, others are pruned back and still others are locked into place, a restyling that moves the brain closer to its adult form. This dramatic adolescent makeover represents a window of opportunity known as a sensitive period, allowing the brain to be selectively shaped by the outside world, new studies hint.

Such sensitive periods are common throughout the first years of life. Incoming sights, sounds and social interactions all pattern the young brain in a way that lets it detect and respond to its particular environment (SN: 8/11/12, p. 18). Within a few years, though, those windows of neural malleability close. But new research suggests that for certain kinds of input, the window may fly back open during adolescence.

Compared with the brains of children and adults, adolescent brains may be especially susceptible to certain kinds of information, such as memory training, social influences or drugs. Even a commonly used treatment to ease fear memories may have different effects during adolescence, scientists are finding.

This heightened malleability of the adolescent brain isn’t the same as the sensitive periods in early childhood, says psychiatrist Jay Giedd of the University of California, San Diego. When it comes to the brain, adolescence is not a “second toddlerhood,” he says. Instead, something different — and fascinating — is going on.

How the teen brain changes 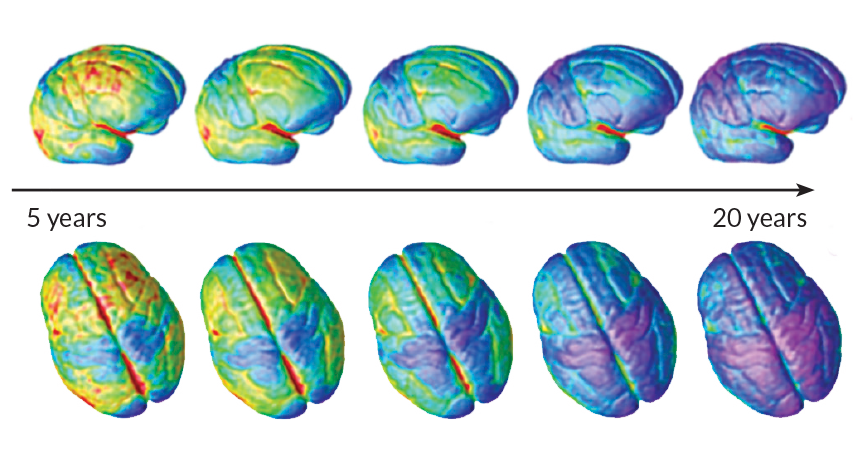 1.     Gray matter throughout the brain shrinks in adolescence (blue and purple indicate a lower volume of gray matter, as shown in the diagram above), a sign that the brain is becoming more specialized.

2.     Nerve cells in parts of the outer layer of the brain called the cortex get wrapped with myelin, an insulating substance that helps speed signals.

3.     Communication links between distant parts of the brain, called white matter tracts, start to solidify into an adultlike structure.

Proving that the adolescent human brain really does show a peak of sensitivity to certain signals in the environment will be tough, though, says cognitive neuroscientist Delia Fuhrmann of University College London. To make the case, scientists must show that some inputs affect an adolescent’s brain more than they affect children and adults, she and colleagues argue in the October Trends in Cognitive Sciences.

Such comparisons have already been made in some cases. In lab experiments, adolescents were more likely than both children and adults to hold on to fearful memories, neuroscientist BJ Casey of Weill Cornell Medicine in New York City and colleagues reported in 2012 in the Proceedings of the National Academy of Sciences. Adolescents learned to associate a colored square with a blast of noise. Later, after the noise was turned off, adolescents shown the square continued to react as if they were going to hear the blast, whereas children and adults learned that the colored square was safe again. Adolescent mice showed the same distinct behavior. The differences between age groups are “not by any means gradual,” Casey says. “Adolescents show a completely different response than children and adults.”

Those results suggest that adolescents are paying close attention to danger signals. “Teenagers remain incredibly sensitive to these cues,” Casey says. And in most cases, “it’s probably very good for them to be vigilant.” That helps adolescents learn about and adapt to the world, she says.

Adolescents hold on more strongly to fear associations than children or adults. The results have implications for treatments to ease fearful memories.

That reluctance to let go of scary signals may have implications for therapies aimed at easing fearful memories in adolescents, Casey and colleagues argued in 2014 in Biological Psychiatry. Cognitive behavioral therapy can include exposure to a fear trigger multiple times, in an effort to help a person learn that the signal is now safe. But because adolescents may have a stronger hold on these memories, this approach might not work well for them.

Other aspects of memory also seem to be distinct during adolescence, Fuhrmann says. By some measures, working memory, or the ability to hold on to and mentally juggle multiple things simultaneously, peaks during adolescence, scientists have found. And people are more likely to remember events that happened between ages 10 and 30, suggesting that autobiographical memories are particularly strong during these years. But whether those skills stem from a greater receptivity to incoming information isn’t clear, Fuhrmann says. To know that, scientists need to test whether adolescents’ memories can be improved more with practice than those of both children and adults.

Adolescents may also be more vulnerable to the ill effects of drugs, animal studies suggest. Rats given cannabis during adolescence showed more cognitive problems than rats that received the drug during either early life or as adults, several studies have found. Similar results were seen with cocaine: When rats were allowed to take cocaine during adolescence, they became more likely to take more cocaine when stressed later in life, researchers reported July 23 in Addiction Biology.

While those results are suggestive, they come from animals. It’s not clear yet whether drugs have outsized consequences for human adolescents, who can be drawn to experiment with illegal substances as a way to explore their world.

But “exploration doesn’t have to mean doing ecstasy all day,” says Beatriz Luna, a developmental cognitive neuroscientist atthe University of Pittsburgh. Adolescents are primed to seek out new experiences in an effort to accumulate knowledge about how to navigate their social world. “We think about it as a period of specialization,” she says. “Up to that point, you’ve been building up brain structure and abilities, and now you’re specializing to fit your particular environment. This is when brain processes become more committed.”

Mental illnesses such as schizophrenia and mood disorders often appear during adolescence.

But the malleability of the adolescent brain clearly isn’t just a gradual decline from the extensive changeability of childhood, Luna says. “It’s unique and different,” she says. “It’s not just the same as children but to a different degree. It’s qualitatively a different thing that’s occurring.”

On September 25, the National Institutes of Health announced a research project that will follow about 10,000 children in cities around the United States beginning at ages 9 or 10. Scientists will track drug use, mental illness, academic skills and other measures, and attempt to link those experiences with brain differences. Called the Adolescent Brain Cognitive Development Study, the project’s goal is to clarify how the adolescent brain responds to certain kinds of input.

Finding out more has big implications for things like education, juvenile crime and mental illness. Many disorders such as schizophrenia, depression and anxiety can appear during adolescence, suggesting that the brain is particularly susceptible during this window.

“There’s a lot we don’t know,” Casey says. Although scientists don’t yet understand the specifics of how certain kinds of information change the adolescent brain, it is clear that the world has a big effect. “It’s this beautiful interaction” between environment and neural development, Casey says. “It’s brains getting wired.”