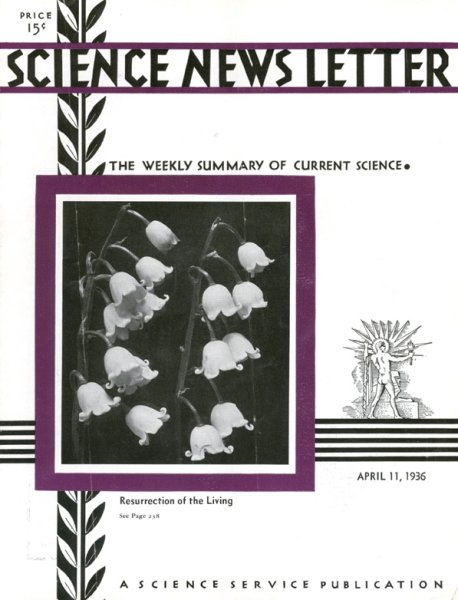 Violets, buttercups, spring beauties, trilliums, Jack-in-the-Pulpit, Solomon’s seal, May-apple, lily-of-the-valley, bloodroot, blue-eyed grass, Dutchman’s breeches—these and a host of other lovely blossoms we instantly hail as gifts of spring. In a way they are, for they come to us in April and May—a few of the most daring in late March—and may therefore be called the gifts of spring as justly as Christmas presents or birthday presents are assigned to their particular anniversaries.

The enlarged photograph of lily-of-the-valley that appears on the cover of this issue of the Science News Letter is by Cornelia Clarke.

ALCOHOL HARMLESS TO LIVER BUT EXCESS INCREASES ITS FAT

The idea that alcoholic drinks have a harmful effect on the liver was somewhat “debunked” by Dr. J.L. Bollman of the Mayo Clinic.

With Dr. F.C. Mann, president this year of the American Physiological Society, Dr. Bollman reported studies at the society’s meeting showing that alcohol increases the fat content of the liver.

The amount of alcohol that produced this effect in the dogs they studied, however, would be equivalent to a ration of one quart of alcohol a day for a man, Dr. Bollman explained. Furthermore, a fatty liver is ordinarily not harmful, although a large fat content in the liver does make it harder for that organ to cope with what Dr. Bollman termed “further insult” in the shape of certain drugs, or surgical operations.

Tapping of electric potentials, or “brain waves,” directly from the brain now gives the psychologist a new tool for the study of what goes on in the mind of man, including the higher thought processes, it is suggested by Dr. Herbert H. Jasper, psychologist of the Emma Pendleton Bradley Home, East Providence, R.I., and Brown University.

If you look at a red light shining in a darkened room and then that light is put out, you will continue to see the light for a time as an “after-image.” In the past, psychologists have been able to study such after-images only through the description by the subject of what he saw. Now, the brain waves give a new and independent verification.

When nerve impulses go to the brain from the eye or the ear, they do not find a nice, quiet group of brain cells awaiting their coming to be set into activity, Dr. Jasper has found.

“These cortical cells seem to have a vigorous activity of their own, but evidently not enough to discourage always the sensory impulses, for they may jump right in and either abolish completely the cortical rhythm or distort it beyond recognition by causing it to behave in a very different manner,” he said.

By watching the record of the brain waves, the psychologist can tell when the subject is seeing the light and how long the after-image persists. When a flickering light is used, he can tell exactly how fast the light may flash and not appear to the observer as a continuous beam.