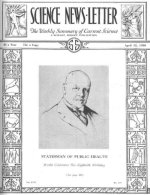 While the whole medical world united in honoring Dr. William Henry Welch on his 80th birthday on April 8, and the president of the United States delivered an address at the Washington celebration, few outside the world of science know who Dr. Welch is or why he was honored in this way.

Picture to yourself a short, stocky gentleman, with head held characteristically on one side; white moustache and Van Dyke; twinkling eyes and kindly smile; a combination of Santa Claus and the world’s nicest grandpas rolled into one, whom all his friends and pupils fondly call “popsy”; a man with the brisk stride of a younger generation, with a brilliant mind and outstanding achievements but extreme modesty; that is Dr. Welch.

Known as the dean of American medicine, Dr. Welch himself has made a number of important contributions to science, beginning with the investigations of his student days. But his greatest contribution has been in the field of medical education.

It is largely owing to his influence and efforts that medical education in the United States holds its present high place, equal to that of any other country. Yet some 50 years ago, when Dr. Welch was just starting on his career as a doctor, it was impossible for a young man to get adequate medical training in this country. Then the practice of medicine was an uncertain, if well-meaning, art. Today it is a science of many branches.

Exact determination of the force of Earth’s attraction now in progress at the U.S. Bureau of Standards will make the United States independent of Germany in a few years in knowledge of how hard Earth pulls things toward it. Speaking in a Science Service radio talk over the Columbia Broadcasting System, Dr. Paul R. Heyl told of the work, which is under his charge. Dr. Heyl’s determination during the past few years of the “constant of gravity,” from which scientists calculate the mass, or “weight,” of Earth, is the most accurate that has yet been made.

The new measurement of the absolute value of gravity is being made to an accuracy of within one part in a million. It will help the surveyors of the Coast and Geodetic Survey to map the country more accurately than ever before.

The classical picture of a chemist as a man peering at a test-tube or anxiously watching a precipitate form in a beaker must now be varied to show him in the role of a wielder of invisible radiations or a watcher of artificial rainbows.

The newer methods of analysis, including X-ray analysis, spectrum analysis, microanalysis, and many other modern refinements and innovations, are such as to leave the man who “took chemistry” a few years ago but who has not paid much attention to it since, floundering and gasping. These new methods were described at the recent meeting of the American Chemical Society in Atlanta.