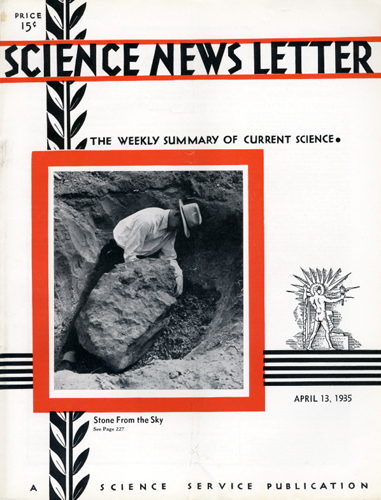 A huge “stone from the sky,” a stony meteorite believed to be exceeded in weight by only one other in the world, has been added to the Nininger meteorite collection in the Colorado Museum of Natural History in Denver. Its dimensions are 35 by 22 by 21 inches and it weighs an estimated 700 pounds, plus an additional 50 pounds of broken-off fragments.

The clue that led to its discovery was supplied by J.D. Lynch Jr., a senior at Hugoton High School. Hugoton is the county seat of Steven County, in southwestern Kansas.

Prof. H.H. Nininger, researcher on meteorites, recently lectured before the Hugoton student body, exhibiting samples of the pitted lumps of iron and stone that occasionally fall from the heavens. Mr. Lynch recognized one of these as similar to a stone that a few years ago crumpled a plowshare for him while he was working in the field. He told Prof. Nininger of the occurrence, and the two, with the latter’s young son Bob, went to the spot where the offending stone had been thrown to get it out of the way.

It proved to be meteoric, but only a fragment of an evidently much larger mass. A search in the field soon turned up a stony meteorite at a maximum depth of 36 inches. It is evidently a very old fall, but there is at present no way of determining its exact date.

Prof. Nininger and Mr. Lynch dug it up, together with a number of fragments, and prepared it for shipment to the museum in Denver. Mr. Lynch is shown in the front cover picture, wrestling with the great stone in its pit.

GOOD ANTIKNOCK GASOLINE MADE FROM COAL IN GERMANY

The famous German I.G. chemical works of Oppau-Ludwigshafen have just completed a three-month-long trial run with a continuous process for making gasoline from coal. A thousand kilos (450 pounds) of coal yielded 600 kilos (270 pounds) of gasoline of good antiknock quality.

Using the Bergius process of hydrogenation, powdered coal and heavy oil are mixed in a chamber with catalysts under a pressure of 300 atmospheres and 460 degrees centigrade temperature.

Elastic layers of rocks, their cracks and pores ironed out by the tremendous weight of the Earth’s crust, are believed to exist 35 miles down from the Earth’s surface, according to preliminary results of experiments now in progress at Harvard University.

In an attempt to explore the composition of the Earth’s crust in regions so deep that they can in all probability never be examined by drilling holes, Dr. Albert Zisman has conducted research on the contraction of rocks under tremendous pressures ranging up to more than 6 tons per square inch.

Laboratory tests have been conducted thus far on granite, norite, and other common rock formations. Cores are cut from solid rock in three directions, perpendicular to each other, and placed in a closed chamber full of kerosene, where the pressure is applied. Delicate apparatus is used to measure minute changes in the size of the cores under pressure.