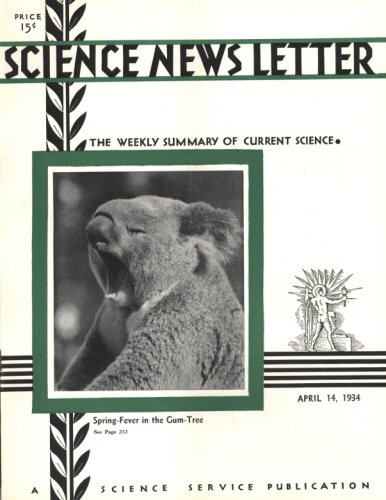 Koala, his proper name is; “native bear,” Australians have nicknamed him, though he is closer kin to our American opossum than to any bear. But he is the living prototype of the “Teddy bear” that has become a worldwide toy, persisting since the days of the first Roosevelt. Pioneers of the Australian bush hunted him for his soft, salable skin, just as mercifully and as recklessly as our own pioneers wiped out some of our own native animals; until now, his principal refuge is the semidomestication of Koala Park near Sydney, established and maintained by Noel Burnet.

Koala is a most popular little fellow: good-natured and gentle as most of the smaller marsupials are, with appealing “human” tricks and mannerisms. He would be in great demand for a pet, without question, except that his feeding habits will probably always keep him confined to his native land. For Koala apparently can live only on the leaves of one species of eucalyptus trees. Repeated attempts to transport him overseas have only resulted in starvation.

Food handlers who zealously keep air away from fresh vegetables, on the theory that the oxygen will destroy their vitamin C content, are running serious risk of ruining flavor, Drs. E.F. Kohman and N.H. Sanborn of the National Canners Association told the food chemists of the American Chemical Society.

Normal access of oxygen does not hurt this vitamin, Dr. Kohman declared, while shutting off the air permits the plants’ own enzymes, as well as those of alien bacteria and molds, to carry on “anaerobic” respiration, producing alcohols and other compounds that give the foods flat and disagreeable flavors.

Why does Johnnie get scarlet fever when his papa does not?

This subject of the effect of age upon our bodily reactions has been newly approached by Dr. Leona Baumgartner of the Yale School of Medicine, who reported her studies to the American Association of Immunologists. Dr. Baumgartner investigated the relationship of the age of an individual to his ability to produce antibodies.

“It is by virtue of these so-called ‘antibodies,’ common examples of which are the well-known antitoxins for diphtheria and lock-jaw, that our ability to resist bacterial diseases is supposedly enhanced, ” Dr. Baumgartner explained.