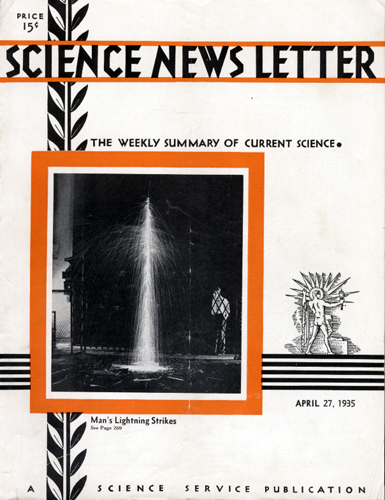 White hot is the shower of metal particles shown on the front cover of this week’s Science News Letter. It was caused by an artificial lightning bolt striking a resistance wire. The photograph was made at the General Electric Company’s high-voltage laboratory at Pittsfield, Mass.

One of the dreams of science, discovery of a way to predict how long an individual will live—if not claimed by murder or other untimely death—was announced to the National Academy of Sciences.

A key to an individual’s normal span of life, long or short, is carried with him, heretofore unrecognized, in his own eye, Dr. Felix Bernstein of Columbia University revealed.

The aging process of the human body, he reported, can be measured easily by taking note of the change when the lens of the eye becomes less elastic, some time during middle life. Most persons become aware of the change at the age of 45 or 50, when the hardening lens can no longer make sufficient accommodation for reading. If this aging process, called presbyopia or “old-sightedness,” occurs early, the individual’s normal span of life is comparatively short. If it occurs late in middle age, the individual can expect to see a venerable old age, unless some infection or accident cuts short his natural lifetime.

Built almost wholly without iron or steel, a new, nonmagnetic ship is planned by Britain to replace the lost Carnegie, formerly operated as a cruising laboratory by the Carnegie Institution of Washington. The Carnegie was destroyed in the harbor of Apia, Samoa, Nov. 29, 1929.

A nonmagnetic ship has tremendous practical importance as well as great scientific value. The deviation of the compass from true north varies from place to place on the Earth, and changes with time. Hence, if navigation charts are to be made and kept accurate, exact compass determinations have to be made periodically.

Paradoxically, although compass accuracy is more important at sea than on land, it is easier to achieve on land than at sea. This is because ordinary ships, even wooden ones, contain so much iron that they disturb the delicate instruments and falsify their readings.

Because of this, the Carnegie Institution of Washington built the nonmagnetic yacht Carnegie, replacing practically all iron and steel fittings and machinery with bronze and other nonferrous metals. Even the two internal combustion engines she carried were almost wholly bronze, the only iron in them being the linings of the cylinders. So small a matter as the iron in the “tin” cans of her stores was a cause of concern to the scientific command.

After the loss of their ship, the Carnegie Institution of Washington decided not to replace her. The British Admiralty, in view of the Empire’s great maritime interests, has therefore undertaken the construction of a nonmagnetic ship of their own. Parliament has just authorized the expenditure of 10,023 pounds sterling as first installment of her cost. Details of the plans are not yet public, but it is probable that the new ship will be larger than the Carnegie.