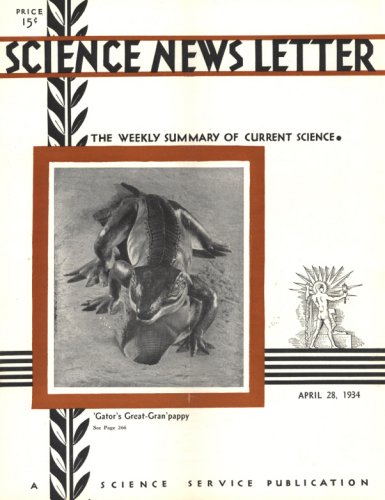 Kipling, in one of his happiest tales, long ago gave us an authentic and authoritative account of how the nose of the Elephant’s Child got that way, from poking it too much into other animals’ affairs—specifically into the affair that is the crocodile’s snout. It has, however, remained for a Yankee scientist, Barnum Brown of the American Museum of Natural History, to dig up the bones of the Crocodile’s Ancestor, and by a technique that combines the knowledge of the anatomist and the skill of the sculptor, to reclothe them with the similitude of flesh and make this strange beast live again before our eyes.

This great-grandpa of all the ‘gators lived some 200 million years ago in a tropical swamp that has since cooled off and dried up and is now part of the Painted Desert of Arizona. Its fossilized bones, which were recovered with practically no parts missing, show it to have been much smaller than modern ‘gators and crocs—only 32 inches long. Its snout was rather shorter in proportion than a modern crocodile’s. It stood up on its legs in a little more lizardlike fashion, and it did not wear nearly so elaborate a suit of armor as any of its modern descendants.

And it had never heard of the Elephant’s Child. There weren’t any elephants then.

The intensity of a sound and its frequency are quite distinct physical attributes, but the corresponding psychological attributes of loudness and pitch are not so independent; a loud tone sounds lower in pitch than a high one, and a low tone sounds unduly loud, it was indicated by a report to the National Academy of Sciences delivered at the annual meeting by Dr. Harvey Fletcher, of the Bell Telephone Laboratories, New York City.

CORONA MAY BE SEEN WITHOUT ECLIPSES BY MEANS OF TELEVISION

Astronomers will not need to chase eclipses around the world for a fleeting few minutes in which to observe the sun’s corona if a new method of observing the corona suggested to the National Academy of Sciences by A.M. Skellett of the Bell Telephone Laboratories proves practical.

Television apparatus promises to solve the problem of viewing the corona at any time that the sky is clear. Mr. Skellett’s scheme is to scan the image of the sky around the sun’s disk with an “electric eye” photoelectric cell in much the same way that a television image is obtained. The glare around the sun is caused by scattering of light and it prevents the seeing of the corona because it is many times brighter. This glare will produce, Mr. Skellett finds, a kind of photoelectric current in the television apparatus different from that of the light of the corona. It will be possible to sort out with electrical filters the high-frequency components of the photoelectric current caused by the corona and then feed them into a television receiver that will reproduce the main features of the corona.