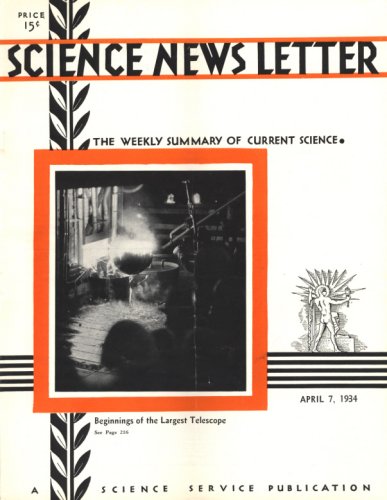 The beautifully blended picture of light and shadow on the front cover of this week’s Science News Letter shows a 400-pound ladle of molten glass being taken from the huge furnace at the Corning Glass Works to be poured into the mold of the 200-inch disk for the new reflecting telescope of the California Institute of Technology. The photograph was taken by James Stokley, Science Service astronomical staff writer.

Through the furnace door to the left, which is just closing, one may glimpse the interior of the furnace at a temperature of 2800 degrees Fahrenheit. Filmy wisps of glass starting to cool as they contact the air can be seen from the edge of the ladle, and the man with the hook is about to remove them.

The ladle is pictured at the beginning of its journey by overhead trolley to the mold nearby. Three ladles were used, each filled from a separate door of the furnace, and about 100 ladle-fulls were poured.

NEW LINK OF MAN AND APE HISTORY FOUND IN INDIA

A new link in the evolutionary history of man and ape has been discovered by the Yale North India Expedition. Investigation of fossil jaw bones and teeth brought back by the expedition reveals the existence of man-like apes nearer to the main trunk of man’s evolution than any living or extinct great apes previously known. The family to which these man-like apes belong could develop in several directions, some becoming more like the great apes, others approaching man.

Three entirely new genera are included among the five fossil jaws found in the badlands region of Potwar, India. Once has been named Ramapithecus, after Rama, the hero of a Sanskrit epic. Another is named Sugrivapithecus, after Sugriva, king of the monkeys in the same saga. The jaw of Sugrivapithecus indicates that the animal had a well-developed chin, a sign of high evolution, said the discoverer of the remains, G. Edward Lewis, the expedition’s paleontologist. The chin is more like that of a primitive man that that of any living great ape. Many features of the teeth show parallels with human anatomy.

Other planets in the solar system have their cycles of weather. Such is the conclusion arrived at by Dr. Wilhelm Becker of the Astrophysical Observatory at Potsdam from a long study of planetary light.

He collected all the observations that have been made on the brightness of the planets Mars, Jupiter, Saturn, and Neptune, from 1840 down to the present time, eliminated the effects of their varying distances from us and from the sun, and reduced all the observations to a common scale and standard position of the planet—a colossal piece of work. When this was done, he found that there were still variations in brightness that could not be accounted for by any external cause, but must be due to changes that take place on the planet itself.

These changes, Dr. Becker believes, are atmospheric. They are comparable to the weather cycles that have been observed on Earth, such as the well-established Brückner cycle of 35 years. This cycle cannot be connected with sunspots because its period would then be 11 or some multiple of 11 years.