A ONE-TON machine that in a single action can solve nine simultaneous equations with nine unknowns so complicated in form they might well require days of laborious computation by trained mathematicians has been developed at the Massachusetts Institute of Technology. Known as the simultaneous calculator, the machine is the product of three years’ research by Dr. John B. Wilbur of the department of civil engineering. Cooperating with him has been Dr. Vannevar Bush, vice-president of technology and dean of engineering, who under the Institute’s program to eliminate delay and complications in engineering and research, has previously made important contributions to the mechanical solution of mathematical problems, including the famous differential analyzer. The simultaneous linear algebraic equations solved by the new machine occur constantly over a wide range of engineering and scientific analyses. Thus although the calculator was originally designed for the solution of problems in civil engineering, such as those involved in the construction of skyscrapers, it is expected to prove equally useful in such diverse fields as nuclear physics, geodetic surveying, genetics and psychology. The mathematician will be able to use it for the evaluation of determinants especially and in several other fields, since the machine under some circumstances can solve for even more than nine unknowns. The machine weighs approximately 2,000 pounds and has more than 13,000 separate parts, induding 600 feet of flexible steel tape and almost 1000 ballbearing pulleys. 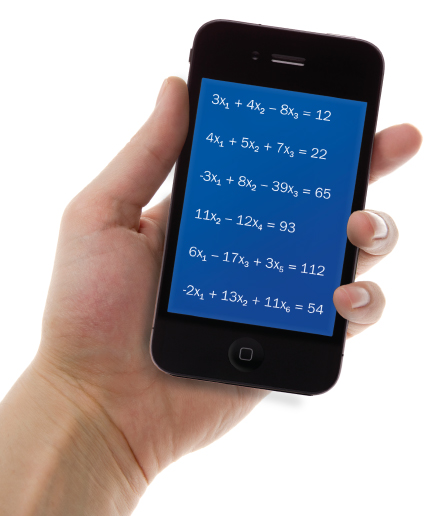 In this age of electronics, pocket-sized computers such as the iPhone make math easy and portable.

One generation’s most impressive inventions can over time become another’s oddities — rendered obsolete and even cumbersome by more advanced technologies. Such was the case with a mechanical calculator developed by John Wilbur of MIT in the 1930s. By tilting a series of plates and then making a single movement of the mechanism, Wilbur could solve a system of nine linear equations with nine variables in just a few seconds. Solving such sets of algebraic equations had — and still has — cross-disciplinary appeal, because the technique allows scientists to study complex systems in which many variables depend on each other. At the time, solving for nine variables in this way could take days with a paper-and-pencil approach. Now, though, a 2,000-pound machine with 1,000 ball-bearing pulleys like the one that Wilbur developed is far from necessary. Computers rely on electronics rather than mechanics, and those electronics improve every year. An app available for the iPhone today can solve a system of 200 linear equations with 200 variables in 0.15 seconds. And it fits in your pocket. As for Wilbur’s car-sized machine, it seems to have vanished along with its usefulness. For many years the machine, dubbed “Robot Einstein,” sat in a hallway of Building 1 at MIT, home to the department of civil engineering. But the machine was last seen in the late 1950s, and (though a replica has turned up in Tokyo) no one has been able to track down the original’s whereabouts. — Elizabeth Quill