With weeks still left in the summer melt season, the Arctic Ocean’s floating skin of ice has already shrunk to a record minimum.

As of August 26, Arctic sea ice covered 4.10 million square kilometers — 70,000 square kilometers below the previous satellite-era record from 2007, according to the National Snow and Ice Data Center in Boulder, Colo.

“The ice cover is now just so thin and weak in the springtime that large parts of it can’t survive the melt season,” says NSIDC director Mark Serreze.

Arctic sea ice grows in winter and melts partly away each summer. Overall, more sea ice has been lost each year as temperatures rise. From 1979 to 2011, the amount of sea ice left in September at the end of each melt season dropped by an average of 12 percent per decade.

The ice isn’t just shrinking; it’s also thinning. The Arctic used to contain lots of thick ice — some  3 to 4 meters thick — that survived year after year. Now it’s dominated by thinner ice only 1 to 2 meters thick and just one to two summers old. “It’s almost like parts of the Arctic have become a giant slushee at this time of year,” says Walt Meier, a sea ice expert at NSIDC.

In 2007, the previous record year, winds, cloud cover and other weather conditions were just right for a lot of ice to melt away. “There were a number of people saying [2007] was a one-off and you’ll never see this perfect storm again,” says Serreze. “What Mother Nature is telling us is that you don’t need a perfect storm anymore, just because the ice is so thin now.”

This year, ice cover stayed pretty much on track with 2007 levels through July, after which it rapidly nose-dived. One possible factor was a strong Arctic storm that spun up north of Alaska in early August, around the same time a lot of ice melted out from the East Siberian Sea.

Serreze and others say it’s too early to know how the storm might have been related to the sea ice loss — whether the storm broke ice apart and made it more susceptible to melting, or whether the two events just happened to coincide. “My gut feeling is that it was probably not critical and we would have reached a new record regardless,” says James Screen, a climate scientist at the University of Melbourne in Australia who has studied the role of Arctic storms in sea ice loss.

Nevertheless, says Meier, storms that thicker sea ice might once have weathered now rank a knockout punch for thin, rotten ice. “The Arctic is becoming like a fighter with a glass jaw,” he says.

The six lowest sea-ice extents in the satellite record have now occurred in the last six years, according to the NSIDC. More melt means more open water exposed to sunlight; that water absorbs more heat and causes feedback loops that heat the Arctic even more.

For now, though, cooler temperatures are returning, and the sea ice should stop melting and begin refreezing by around mid-September. How much more ice gets lost between now and then “all depends on atmospheric conditions,” says Claire Parkinson, a sea ice expert at NASA’s Goddard Space Flight Center in Greenbelt, Md.

But this year’s small lingering ice pack probably means less ice next spring. “It sets us up for another world of hurt next year,” says Serreze. 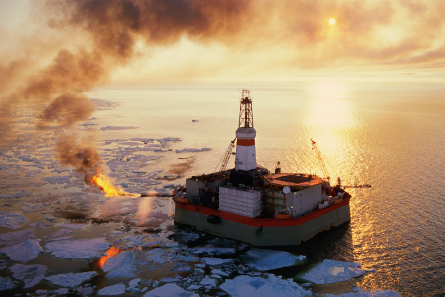 With Arctic ice melting more on average each summer since 1979, scientists are placing bets on when the top of the world might be completely ice-free for the first time in millennia. An “ice-free” Arctic might still contain some sea ice packed along the coasts of Alaska and Siberia. But the center would essentially be blue ocean.

Mark Serreze, director of the National Snow and Ice Data Center, is sticking by his longtime estimate of 2030 for an ice-free Arctic. Others think it could come sooner. At the rate ice cover and volume are dropping, the Arctic could be nearly ice-free in summer as early as 2016, according to a May paper in the Annual Review of Earth and Planetary Sciences.

Arctic nations — including Canada, Russia and the United States — are already jockeying to see what an ice-free Arctic might mean for expanding shipping or oil exploration.