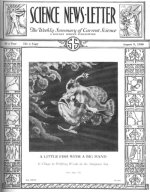 A FISH WITH HANDS

A fish of more than ordinary piscine talent is sometimes found in the drifting masses of gulfweed or Sargassum in the great mid-Atlantic eddy. It is only a little fish, a couple of inches long, but it can use its two pectoral fins for some of the functions of hands.

It can contract them laterally, though the stiff rays prevent the longitudinal rolling allowed by jointed fingers of men and monkeys. Even this limited prehensile power, however, is highly useful to the little fish, for with one fin or the other it often clings to stalk, blade, or float of the drifting weed in whose shelter it lives. Spread out and held downward, as in a gesture of emphatic denial, these fins serve the usual vertical steering function even more efficiently than do the pectorals we see on familiar fishes.

The picture of this fish on the cover is reproduced by permission of the publishers of Wilfrid Swancourt Bronson’s book, “Fingerfins.”

Maintaining an average speed of 15 miles per second, a planet named Eros is on its way to visit the Earth. Eagerly awaited by astronomers all over the world, this small but fascinating member of the solar system will remain in the neighborhood of the Earth from October 1930, to May 1931.

The present visit is the most intimate that Earth astronomers have enjoyed since the discovery of the eccentric little planet in 1898. Never quite visible to the naked eye, this coy little visitor will be easily reached by field glasses and small telescopes during several months of its stay in our vicinity.

Though believed to be only about 15 miles in diameter, Eros is the most valuable and useful member of a family of 1100 asteroids. Owing to the fact that it will come within 16,700,000 miles of the Earth, or one-fifth the sun’s distance, it will be pulled out of its elliptic path by the attraction of the Earth. By carefully measuring the amount of this deviation, astronomers can determine the extent of the Earth’s gravitational power, and compute the mass or weight of the Earth more accurately than it has been ascertained by other methods. When the number of tons of material contained in Earth are known exactly, the sun’s distance can be determined by comparing its attraction for Eros with the Earth’s influence.

BIRTHPLACE OF THE MOON

The fact that the north and south magnetic poles of the Earth are approximately at the ends of the Pacific Ocean Basin is circumstantial evidence for the old theory that the moon was born from that part of the Earth.

According to this idea, at some time in the distant past a huge mass was torn loose from the Earth to form the moon, and the hole that it left is now the Pacific Ocean. The magnetic evidence is pointed out by Dr. Oliver J. Lee of the Dearborn Observatory, Northwestern University.

The geographical north and south poles of the Earth are, of course, symmetrically placed, 180 degrees apart, or just half way around from each other. Dr. Lee points out that the case of the magnetic poles is different.

“A remarkable asymmetry exists in the longitude of the Earth’s magnetic poles, which are at present in 96 west and 155 east longitude,” he states. “They are, therefore, only 109 apart, and their longitudes mark out roughly the average boundaries of the Pacific Ocean, the vast basin of which has many ‘deeps’ and is enclosed by a giant circlet of extinct and active volcanoes.”

“If this basin is the birthplace of the moon, it does not seem unreasonable to expect that enough of the heavier, deep-lying magnetic elements in the earth may have been torn along, placenta-wise, on that natal occasion to actually fix the magnetic poles of the Earth in these regions. Perhaps it would be better to say that when the lunar material departed, a shift in the distribution of magnetic materials within the remaining mass took place toward the Pacific basin.”