A last-ditch weapon against drug-resistant bacteria has met its match in Pennsylvania.

A 49-year-old woman has tested positive for a strain of Escherichia coli resistant to the antibiotic colistin, researchers report May 26 in Antimicrobial Agents and Chemotherapy.

It’s the first time in the United States that scientists have found bacteria carrying a gene for colistin resistance known as mrc-1, write study coauthor Patrick McGann of Walter Reed Army Institute of Research in Silver Spring, Md., and colleagues.

But perhaps even more alarming is that the gene rides on a transferable loop of DNA called a plasmid.

“That means we now see a possibility of spread,” says physician and clinical microbiologist Robert Skov. And not just from mother cell to daughter cell, he says, but to neighboring strains of bacteria, too.

Bacteria carry most of their genetic information in a tangle of DNA contained in chromosomes inside the cell. But tiny loops of DNA called plasmids hang around outside of the tangle. These loops carry extra information that bacteria can use, like how to protect themselves from antibiotics. Bacteria can swap plasmids like trading cards, effectively spreading instructions for antibiotic resistance.

Countries with antibiotic-resistant mcr-1 gene in humans as of March 1, 2016 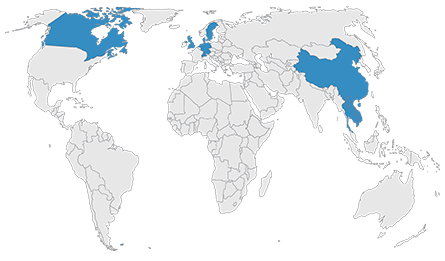 GOING GLOBAL  An antibiotic-resistant gene, mrc-1, had cropped up in a number of countries across the globe by March 1, 2016. Now, scientists have found E. coli bacteria carrying the gene in the United States, too.

In December, Skov and colleagues discovered a Danish patient carrying bacteria with mcr-1 plasmid DNA, like the woman in Pennsylvania. And in November of 2015, researchers reported something similar in China.

Until then, all known colistin resistance was due to tweaks in chromosomal DNA (which, unlike plasmid DNA, isn’t easily spread among bacteria), says Skov, of the Statens Serum Institut in Copenhagen, who was not involved with the new work.

Colistin, a 50-year-old drug that doctors largely stopped prescribing in the 1970s because of its side effects, has made a comeback in the last five to 10 years. It’s used when other antibiotics fail; it’s a treatment option for people infected with multidrug-resistant bacteria. Now, with colistin-resistant bacteria, Skov says, antibiotic treatment options are becoming more and more limited.

The problem, scientists have been pointing out for years, is that people are taking antibiotics too frequently. More use means more opportunity for bacteria to develop resistance.

Still, even with colistin-resistant bacteria emerging all over the world, Skov says he doesn’t expect thousands of people to become infected.

“The scenario now is that once in a while, we’ll see a patient carrying bacteria that we don’t have any good antibiotics left for.” But that, he adds “is dreadful enough.”