A meteorite that fell where California’s gold rush began has triggered a similar gold rush for scientists: to study one of the freshest, most unusual space rocks around.

The Sutter’s Mill meteorite turns out to be a rare, carbon-rich type known as a carbonaceous chondrite. Its insides are a jumble of different primitive space materials mashed together in a single rock.

“It’s a real hodge-podge,” says Monica Grady, a meteorite expert at the Open University in Milton Keynes, England. “It tells you that the asteroid it came from has had a very interesting history.” Grady and her colleagues describe the Sutter’s Mill find in the Dec. 21 Science.

On the morning of April 22, a bright fireball swept across the Nevada and northern California sky, accompanied by strong winds and a sonic boom. Weather radar detected an object disintegrating just west of the Sierra Nevada.

Meteorite hunters immediately fanned out to pick up the pieces. The first distinctive black fragment was found in a park in the town of Coloma; Peter Jenniskens, a meteor astronomer at the SETI Institute in Mountain View, Calif., soon spotted the second, crushed slightly by a car. He even enlisted a zeppelin to fly over the region, looking for impact craters left by big pieces. (He found none.)

Over the next few months searchers collected at least 77 meteorites, together weighing nearly a kilogram. Three of those were picked up in the first two days, before rains washed over the area. That quick recovery allowed scientists, organized by Jenniskens, to start studying the rock before water altered its minerals.

“Meteorites like Sutter’s Mill represent the most primitive material of our early solar system,” says team member Qing-zhu Yin, a geochemist at the University of California, Davis.

Carbonaceous chondrites, which are thought to have delivered lots of water to the early Earth, make up less than 3 percent of known meteorites. The Sutter’s Mill specimen belongs to a subclass known as CM, rocks that are particularly rich in organic compounds.

Yin’s lab soon determined that the meteorite contains at least 78 separate chemical elements, and was born from dust and gas swirling around the newborn sun 4.567 billion years ago.

After that, things got complicated. The Sutter’s Mill meteorite was once part of a bigger asteroid, but it also contains chunks of many smaller things, just as a stew might contain pieces of beef and carrot and onion. That kind of jumbled-up rock, known as a breccia, forms as cosmic collisions pulverize an asteroid, breaking it apart and delivering new chunks from the impactors hitting it.

After billions of years, one of those collisions kicked off the chunk that sailed through space for some 50,000 years — as its exposure to cosmic rays suggests — before slamming into California. It was the biggest meteorite impact on land since another well-studied meteorite hit Sudan in 2008 (SN: 4/25/09, p. 13).

Both the Sudan and Sutter’s Mill meteorites were about 4 meters wide, but the Sutter’s Mill one came in twice as fast — at nearly 29 kilometers per second. “Never before has anything been recovered from something coming in so fast,” says Jenniskens. It broke apart 48 kilometers high, with the energy of 4,000 metric tons of TNT.

Its trajectory shows it was traveling on a very unusual, stretched-out orbit. Only one other space rock, which fell in 2009 in Denmark, has been seen following a similar path. Both may trace back to a family of asteroids called Eulalia, which orbit the sun in the asteroid belt between Mars and Jupiter, circling three times for every one time Jupiter orbits. On a close pass, Jupiter’s gravity may have kicked Sutter’s Mill on a path to hit Earth, Jenniskens says.

The rock’s beat-up nature suggests that many of the Eulalia asteroids may have suffered more than previously thought. More answers may be coming soon; some properties of the Sutter’s Mill meteorite, like how it reflects light, are similar to the carbonaceous asteroid that Japan’s Hayabusa-2 spacecraft plans to visit in 2018. NASA and the European Space Agency are also planning missions to carbon-rich asteroids in the next decade.

“Sutter’s Mill might provide a rare glimpse, a prelude so to speak, of what we might find on these target asteroids,” says Yin. “For me, the fun is just starting.”

Back Story | CATCH A FALLING STAR
More than 1,000 meteorites have been collected after being seen falling to Earth. Many of them have spectacular tales attached, some of which may be too good to be true 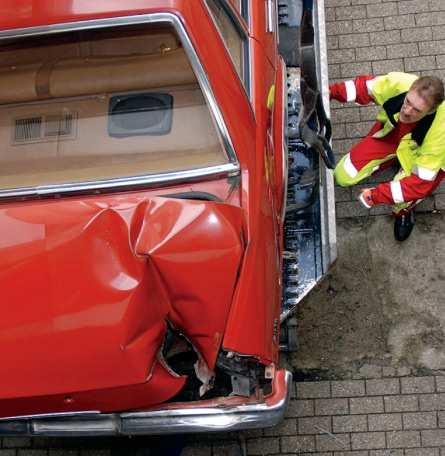 A car hit by a meteorite arrives for display at the Landesmuseum Oldenburg in Germany. Credit: Wolfgang Kehmeier/DAPD

Ensisheim, France, 1492 In one of the first witnessed falls on record, a meteorite plunged into a wheat field, astonishing the locals. Villagers started chipping off pieces as souvenirs until a local official stopped them.

Nakhla, Egypt, 1911 Some 40 stones were seen plummeting from the sky. One reportedly hit a dog. Later analysis showed that the rocks were from Mars and had spent some time with water percolating through them.

Peekskill, N.Y., 1992 Skies over much of the eastern United States were lit up by a huge meteor. A 12-kilogram chunk of space rock blasted through the trunk of a red 1980 Chevy Malibu (above).

Tagish Lake, Canada, 2000 A bright fireball appeared, accompanied by loud sounds, over the Yukon and northern British Columbia. Meteorite hunters eventually recovered between 5 and 10 kilograms of a carbonaceous chondrite.

Lorton, Va., 2010 A doctor’s practice found its late afternoon routine interrupted when a rock from space plummeted through the roof and embedded itself in three pieces in the floor of an exam room.