For medical professionals battling one of the world’s deadliest childhood infections, 1998 offered soaring hope. That fall, the first vaccine against human rotavirus–a highly contagious if somewhat obscure diarrhea-causing pathogen–went into pediatric use throughout the United States. The following year brought a shattering disappointment: Reports of a rare but serious side effect caused the manufacturer to suspend the vaccine’s production. In the aftermath of that setback, researchers redoubled their efforts to find a safe way to check the spread of rotavirus. Advanced trials of competing vaccine candidates are now under way, and early results suggest that the medical pieces needed to checkmate rotavirus may soon be in place. 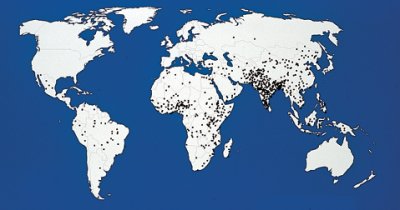 Rotavirus may not be a household term, but it’s a universal germ. “All humans are infected by the time they’re 5 years old,” says virologist H. Fred Clark of the Children’s Hospital of Philadelphia. “Everybody gets [infected], regardless of economic status. Ordinary hygienic measures do not prevent the spread of rotavirus.”

Infection typically confers lifelong immunity, so the disease almost always appears in young children rather than in adults.

Diagnosis of short-term rotavirus infections is rare. But each year in the United States, rotavirus makes 50,000 or more kids sick enough to require hospitalization, causes 20 to 40 deaths, and racks up costs of about $1 billion.

In poorer countries, rotavirus takes an even greater toll. A worldwide body count of at least 450,000 and up to 800,000 each year puts rotavirus sixth among infectious killers. Among children, only pneumococcus, malaria, and measles are more deadly than rotavirus.

The unveiling 5 years ago of a vaccine designed by scientists at the National Institutes of Health (NIH) in Bethesda, Md., and produced by Wyeth Laboratories of Marietta, Pa., appeared to be a major breakthrough for global health.

Albert Z. Kapikian and his NIH colleagues fashioned their vaccine from a strain of rotavirus that naturally infects rhesus monkeys. To make the rhesus strain recognizable to the human immune system, the scientists added genes from the four most common human rotavirus strains.

Wyeth-funded studies revealed that giving infants three oral doses of the live, hybrid virus prevented many cases of rotavirus infection and reduced the severity of infections that did occur (SN: 10/25/97, p. 263). The U.S. government approved the vaccine, which Wyeth named RotaShield. Pediatricians in the U.S. administered more than 1 million doses of the Wyeth vaccine between October 1998 and July 1999.

A study of more than 1,000 children in New Orleans who received the vaccine from their pediatricians found that three doses completely prevented rotavirus infections requiring hospitalization, and that one or two doses reduced the risk of hospitalization by more than 60 percent. Rodolfo E. Bégue of Louisiana State University in New Orleans and his colleagues reported the findings in the December 2002 American Journal of Epidemiology.

“It was a very exciting time,” Kapikian recalls. He and other researchers expected that foreign countries would follow the U.S. lead and that the vaccine might ultimately save more than 1,000 lives per day.

An unforeseen problem, however, soon froze the vaccine’s use. Data from a national system for monitoring vaccines’ performance suggested that in the 2 weeks after children received the Wyeth vaccine, they had an elevated risk of developing a potentially fatal intestinal blockage called intussusception.

“We were surprised,” says Kapikian. “It was very, very disappointing.” The finding led the national vaccine committee to withdraw its recommendation.

After the United States rejected the vaccine, no other country took it up–although rotavirus currently kills 1 in every 300 infants in the developing world. Wyeth voluntarily ceased to produce the vaccine and is now working on other approaches against rotavirus.

The demise of the Wyeth vaccine opened the field to other vaccines in development, including one created by Philadelphia’s Clark with funding from the pharmaceutical giant Merck & Co. in Whitehouse Station, N.J. If the results of current safety trials allay concerns about possible side effects, Merck’s candidate vaccine could be on the market within 3 years.

It’s been a long time coming: In the early 1980s, Clark hypothesized that a bovine rotavirus might prime people to fight off the human form of the pathogen. In an approach similar to Kapikian’s, Clark and his colleagues mixed a bovine rotavirus with rotavirus strains they’d isolated from sick infants in Philadelphia. The strains then swapped genes. Out of the mix, the researchers selected viruses that were genetically less than 10 percent human rotavirus but that displayed a protein on their surfaces to which the human immune system responds.

When the Wyeth vaccine stumbled, RotaTeq became a leading candidate.

“While a naive reaction might be that bad news for your competitor is good news for you, it ain’t true,” says Clark. Wyeth’s experience, he says, has placed a burden on all vaccine makers to test whether their rotavirus formulation causes rare adverse events such as intussusception. That requires safety trials that are 5 to 10 times as large as they would otherwise need to be, he says.

To test the product, Penny Heaton of Merck and her colleagues have enrolled more than 55,000 infants in 11 countries and currently plan to add at least 5,000 more babies to the study. Half of the babies get the vaccine and half get an inert solution with a similar salty-sweet taste.

Because the study’s design doesn’t permit the researchers to know which children get the vaccine and which the placebo, Heaton won’t be able to thoroughly analyze the data until at least next year. She nevertheless finds reasons to be optimistic.

There have been only a handful of intussusception cases among the 55,000 kids, and none has arisen within 2 weeks of a child receiving either the vaccine or placebo, Heaton told Science News. If the Merck vaccine caused or accelerated abdominal blockage soon after a vaccination, it would be apparent by now, she says.

Another encouraging sign, Heaton says, is that few children who receive the Merck vaccine excrete detectable quantities of its virus in their stool, whereas virus was detectable in the stools of about half the recipients of the Wyeth vaccine. The Merck vaccine’s viruses may replicate less readily in the body and therefore put less stress on the small intestine than the Wyeth vaccine did.

Data from a Merck-funded trial in Finland suggest that the new vaccine is working. Timo Vesikari of the University of Tampere and his colleagues report that, among 1,946 infants, RotaTeq conferred immunity against 59 to 77 percent of rotavirus infections, depending on the dose of the vaccine given.

Merck isn’t the only company testing a possible rotavirus vaccine. The London-based pharmaceutical company GlaxoSmithKline has a candidate vaccine called Rotarix, which is also in advanced safety trials.

The GlaxoSmithKline vaccine differs from both the Wyeth and Merck vaccines in that it’s fashioned strictly from a human form of rotavirus, says its inventor Richard L. Ward of Cincinnati Children’s Hospital Medical Center.

Ward and his colleagues made their vaccine from an entirely human pathogen. They began with the most common human rotavirus strain, known as serotype G1, and forced the virus to adapt to laboratory conditions. The process, called attenuation, reduces a pathogen’s viability in the body.

Some scientists, including Clark, worry that an attenuated rotavirus could reverse its changes once it’s reintroduced into people. Kapikian notes that since the attenuated virus is derived from just one strain, it might not confer immunity against all human rotaviruses.

Theoretical limitations notwithstanding, Ward’s approach seems to have worked. In the November 2002 Journal of Infectious Diseases, Ward and his colleagues reported that among 184 healthy U.S. infants followed for 2 years after vaccination, the GlaxoSmithKline vaccine reduced by more than 75 percent the risk of any rotaviral illness. None of the vaccinated children suffered an infection severe enough to require medical care. That makes the new vaccine at least as effective as Wyeth’s was, Ward says.

GlaxoSmithKline recently initiated a trial comparable in size to Merck’s current rotavirus-vaccine study. Preliminary data on 1,986 Latin American children suggest that the attenuated-virus vaccine was 77 percent effective at preventing severe infections caused by either serotype G1 or other strains, GlaxoSmithKline researchers reported last November at the Infectious Diseases Society meeting in Santiago, Chile. Data on tens of thousands of subjects will be required to evaluate the potential for rare side effects.

While competing Western drug companies move forward with safety trials, a Chinese company already has a vaccine on the market. Authorities there maintain that the product is safe and effective, but U.S. scientists say that no credible data support the claim. Nevertheless, millions of doses of the vaccine have already been given to infants in parts of China.

In India, the country with the largest death toll from rotavirus, a candidate vaccine based on an attenuated human strain of rotavirus is under development with help from Centers for Disease Control and Prevention (CDC). “Those studies are just in their infancy,” says CDC’s Roger I. Glass, but if the vaccine can eventually obtain government approval there, it could have an immediate, dramatic effect on infant mortality.

Meanwhile, Ruth Bishop and Graeme Barnes of the University of Melbourne in Australia are conducting experiments with a human strain of rotavirus that, although never attenuated in the lab, doesn’t cause illness in people. Early studies suggest that only some children inoculated with the virus mount an immune response, but if they do so, they gain protection from disease-causing strains of rotavirus.

Other researchers are taking approaches that don’t use live viruses. For example, Mary K. Estes at Baylor College of Medicine in Houston and her colleagues have designed organic particles that resemble rotaviruses. In rodents, these viruslike particles trigger immune responses similar to those produced by rotavirus infection.

Regardless of which vaccines emerge successful from testing, public health organizations are preparing for a global assault on rotavirus. They want to ease the regulatory and distribution hurdles that often make global availability of a childhood vaccine lag a decade or more behind its introduction in the West.

In February, the Seattle-based Program for Appropriate Technologies in Health (PATH) received a 3-year, $30-million grant intended to speed widespread use in poor countries of rotavirus vaccines, once they’re licensed. The funding came from the Global Alliance for Vaccines and Immunizations–a partnership of vaccine manufacturers, governments, the World Health Organization, the World Bank, and philanthropic foundations–and its subsidiary, the Vaccine Fund.

A first step for PATH’s project, says its director, John Wecker, is to test vaccine efficacy in Asia and Africa. PATH will fund these trials, run in conjunction with the vaccine manufacturers. Governments of poor countries often hesitate to fund public health campaigns when data have been collected only in well-nourished populations served by modern medical facilities. PATH expects its studies to encourage pharmaceutical companies to market a product in the developing world, Wecker says.

Prospective buyers and sellers of the vaccine will also need subsidies to bridge the gap between the vaccine’s cost and many countries’ limited resources for vaccine procurement, Wecker says. The Vaccine Fund already supports distribution of several childhood vaccines. When a safe, effective rotavirus vaccine is ready for prime time, it will be a natural addition to that list.

If you have a comment on this article that you would like considered for publication in Science News, send it to editors@sciencenews.org. Please include your name and location.