On March 17, Lloyd Knox, a cosmologist at the University of California, Davis, joined scientists around the world in celebrating a Nobel Prize–worthy discovery. That day researchers from the Background Imaging of Cosmic Extragalactic Polarization project announced that their telescope at the South Pole, BICEP2, had detected a subtle twirling pattern imprinted on light that had traveled across the universe for 13.8 billion years.

The measurement was impeccable, the implications profound. The imprint, the BICEP researchers said, could be made only by gravitational waves, ripples in space triggered when the universe explosively kick-started its expansion a split second after the Big Bang. If the results held up, they would serve as the first direct evidence of that rapid expansion, known as inflation, which was predicted in 1981 to explain the uniform structure of the cosmos (SN: 4/5/14, p. 6). “I was euphoric initially,” Knox says. “This was a really exciting development.”

Once the preliminary rush of excitement waned, cosmologists turned their focus to the details of the analysis — and that’s when serious doubts began to emerge. While BICEP researchers insist their signal was imprinted on the universe’s oldest light, Knox and other researchers fear that the light came from a more mundane source: interstellar dust in our own galaxy. A growing number of cosmologists now say the potential contribution of dust is so significant that the BICEP team does not have the evidence to claim a discovery.

“The measurement is exquisite. It’s really an amazing technical achievement,” Knox says. But “their case that it’s not something in our own galaxy is not very strong.”

Galactic dust can be a nuisance when trying to study the far reaches of the universe. When stars like the sun reach old age, they belch microscopic rod-shaped dust grains that eventually clump into clouds throughout the galaxy. Those dust particles not only obscure light from more distant objects, but also emit light of their own. Starlight heats the clouds to about 20 degrees Celsius above absolute zero, warm enough for dust to radiate low-energy light in the form of microwaves. That’s the same type of light that makes up the cosmic microwave background, or CMB, the ancient light that BICEP2 was designed to measure.

Further complicating things, dust also polarizes light: Dust’s elongated shape forces the light waves it emits to align in the same direction. That polarization can take on a twirling pattern identical to the one BICEP researchers sought in the CMB to support the theory of inflation.

BICEP researchers knew their telescope could not tell the difference between sources of light. Confidence in their claim came from the painstaking work they had done to minimize the influence of dust. They pointed BICEP2 toward a part of the sky known to have very little dust. And they probed for light at a frequency, 150 gigahertz, at which the CMB should stand out above the Milky Way’s dusty glare. The CMB puts out most of its energy at about 160 gigahertz; dust radiates predominantly at around 3,000 gigahertz. 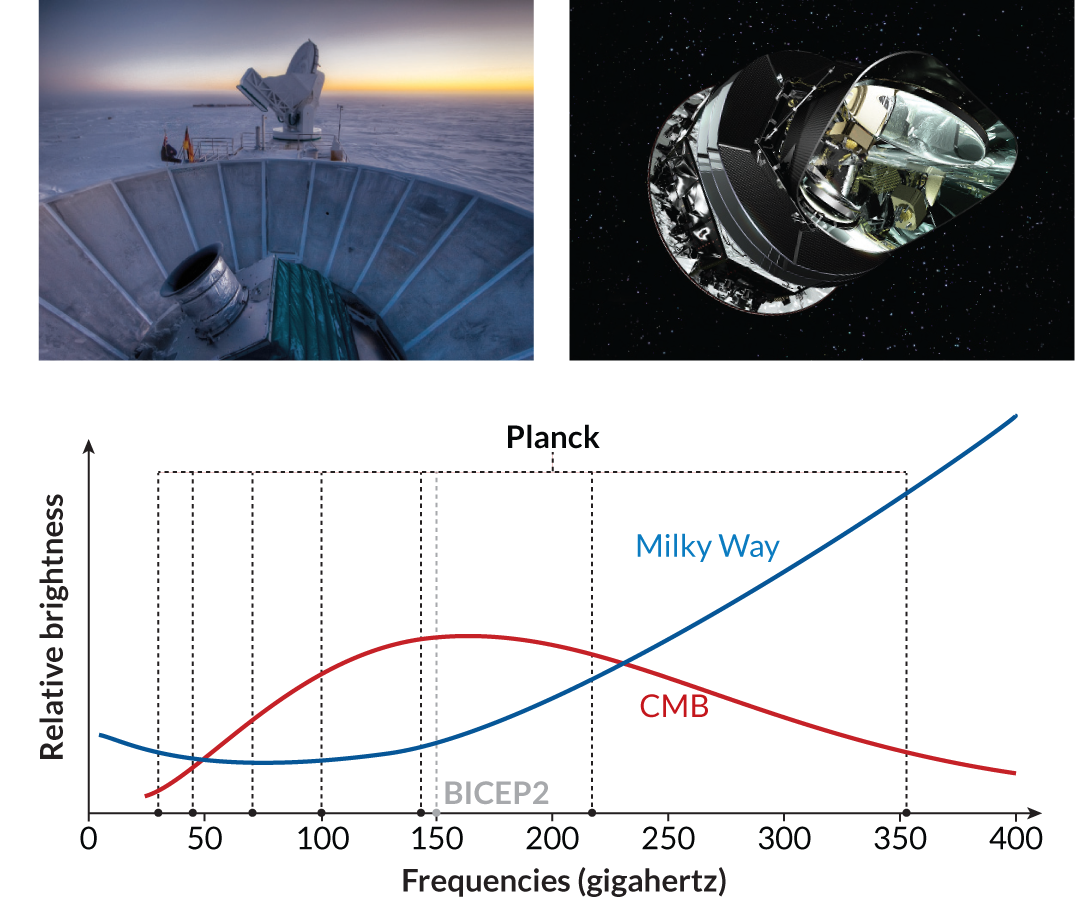 BICEP2 (top left) measured the polarization of light at 150 gigahertz, a frequency at which ancient light (red) of the cosmic microwave background is estimated to outshine light emitted by dust and other galactic sources (blue). Data from Planck (top right) could settle the debate with measurements at seven frequencies, shown.

Unfortunately for the BICEP team, scientists have only rough estimates of how strongly dust-emitted light is polarized. So when the time came to scrutinize the telescope observations and separate CMB from dust, BICEP researchers had to make some assumptions and rely on whatever scant dust data they could get their hands on.

Such data included slides from a 2013 talk given by a researcher affiliated with the space-based Planck telescope, which recorded polarization measurements at seven frequencies of light as part of its mission to map and characterize the CMB across the entire sky. The complete results have yet to be released, but one of the presentation slides showed a preliminary Planck polarization map. BICEP researchers took a PDF of the slide — an elliptical Rorschach inkblot of reds, yellows and blues — converted the image into a grid of numbers based on color, and used the numbers as one way of estimating the dust contamination in their own data.

This slide-scraping maneuver triggered the first serious challenge to the BICEP discovery. In a May 15 presentation, Raphael Flauger, a physicist at the Institute for Advanced Study in Princeton, N.J., suggested that the BICEP data teased out from the slide underestimate how strongly galactic dust polarizes light. After conducting an analysis that included scraping data from other Planck slides, Flauger concluded that without more data there is no way to tell whether the inflation signal would remain after removing the effects of dust. “At the lower end of my estimation, it looks like everything may be OK,” he says. “At the upper end, the dust could make up the whole signal.”

Another independent analysis, this one sans slides, supports Flauger’s conclusion. Michael Mortonson and Uroš Seljak, cosmologists at the University of California, Berkeley, combined BICEP2 data with previously released Planck temperature maps that indirectly indicate the amounts of dust-polarized light. Mortonson and Seljak assert, in a paper posted May 22 at arXiv.org, that there is no clear evidence for gravitational waves in the data. “We’re not saying that there’s definitely no signal from inflation,” Mortonson says. “But given the uncertainties, we can’t really say either way if it’s all dust or all inflation or some combination of the two.”

A newly released Planck map of polarization across most of the sky (SN: 6/14/14, p. 14) provides more ammunition for BICEP critics. Though the map doesn’t include the small area of the sky observed by BICEP2 (that region is still under analysis), Flauger argues that the new map shows stronger polarization, in general, across the sky than BICEP researchers used in their calculations. The map also reveals that regions of the galaxy with low concentrations of dust can emit highly polarized light, Mortonson says. Since BICEP2 observed a low-dust part of the sky, the polarization due to dust may be higher than assumed.

Despite these recent challenges, BICEP researchers aren’t backing off. Jamie Bock, a Caltech astrophysicist on the team, points out that BICEP’s analysis does not depend solely on the digitized Planck maps. The researchers used six theoretical models of how the dust affects polarization, he says, mostly drawn from older data.

The team also has data from BICEP2’s predecessor, BICEP1, which observed the same patch of sky at two frequencies. The BICEP1 data support the assertion that dust contamination in this part of the sky is very low, Bock says. “We stand by our data.” The team’s paper is under review for publication, and Bock says that its central claim stands.

The real test should come later this year when scientists with the Planck telescope publicly release all of their polarization data, says Bock, who helped design the detectors for both Planck and BICEP2. By piecing together data from all seven frequencies, astronomers should be able to deduce how strongly the BICEP2 observations were influenced by dust.

However, some scientists worry that Planck won’t be capable of confirming or rejecting the BICEP findings. “Planck was not designed from the start to go after polarization,” Knox says. Planck’s primary mission was to measure the brightness of the CMB; engineers substantially modified the original design to add the polarization capability.

If Planck can’t resolve the debate, other telescopes might help. The Keck Array, a second South Pole telescope run by the BICEP team, is soaking up microwave light at yet another frequency. Keck’s sensitivity should surpass BICEP1’s, Bock says, and fill in the gaps. Plus, at least half a dozen experiments at other sites are trying to replicate BICEP2’s discovery.

For now, the community has to wait for data that can settle the issue. Knox says it’s difficult to be patient after all the excitement of the March announcement, but nobody wants to put blind faith in a discovery that could end up as dust in the wind. “It’s a claim of such extraordinary significance,” he says, “that it’s emotionally difficult now to be uncertain.”