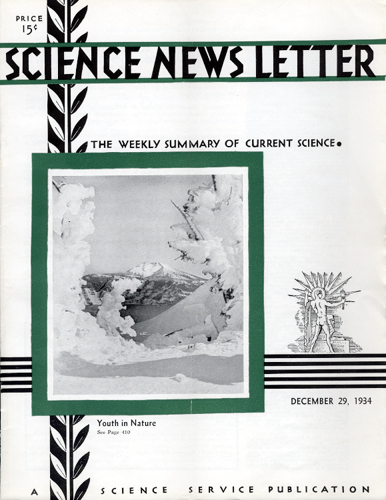 Blue Crater Lake, in the national park of that name, at last has divulged the secret of its age. Not all at once, however. A few facts it revealed to the geologist, a few more to the student of tree rings, others to the engineer. Putting two and two together, these various specialists have come to the conclusion that Crater Lake is young, not yet 1,000 years old.

Crater Lake lies in a great volcanic crater, and from the floor of this crater rise two islands, results of the last puffs of volcanic action. One of these, Wizard Island, is a small volcano. On its shoulders it bears a mantle of tree life, the first that ever grew there, according to scientists. By counting the annual rings on cores of wood bored out of these trees, Dr. W.G Vinal has found some of them to be nearly 800 years old.

Since observations by scientists and others of various volcanoes show that only a few years elapse between the cessation of eruptions and the growth of plant life on volcanic slopes, it is estimated that the probable cessation of volcanic activity on Wizard Island occurred some 900 to 1,200 years ago. Since the rocks of the island do not show the characteristics of lava that has flowed into or through water, it is believed that the lake is younger than the island, or well under 1,000 years.

Chromosomes, the heredity-bearing bits of living matter within cells, have had their internal structure explored to a new high point of detailed intimacy by Dr. C.W. Metz and Miss E.H. Gay, members of the research staff of the Carnegie Institution of Washington working in the laboratories of the Johns Hopkins University. They tell (Science, Dec. 21) of finding a net-like or honeycombed structure within or between the band-like disks, of which other scientists have recently shown the chromosomes to consist.

Electricity generated by enormous disks spinning in vacuum and “piped” unlimited distances along vacuum-surrounded rods, carrying cheap energy from great water power developments or coal and oil fields to the centers of population, is the possibility held out by Dr. Karl T. Compton, chairman of the Science Advisory Board, in a research project recommended to President Roosevelt for federal financing.

This revolution in both the making and the transporting of electricity has been in the making for the last 5 years. Young Dr. Robert J. Van de Graaff is the scientist mainly responsible. The 10-million-volt electrostatic generator built by the Massachusetts Institute of Technology at Round Hill, Mass., is the first step toward an electrostatic generator suitable for commercial power production. The transmission system proposed, an airless pipe with a rod running through it, has probably been tested, but no experimental results have been announced.