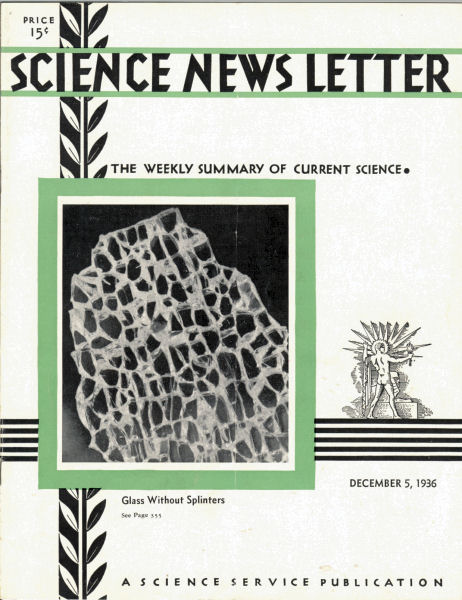 Several centuries ago, the philosophers were mystified by the remarkable properties of a peculiar, pear-shaped bit of glass having an elongated tail. “Prince Rupert Drops” withstand hammer blows on the bulbous section but fly into bits as the tail is broken off. Such drops are highly strained—a heavy compressional layer surrounding a zone of terrific tension. Such a distribution of internal stress accounts fully for their unusual properties.

A somewhat similar phenomenon is demonstrated by means of the classical “Bologna Phial.” This heavy-walled flask may be considered a hollow portion of an enlarged Prince Rupert Drop. Mr. C.J. Phillips demonstrates their great strength by using them as a hammer to drive spikes into a board. These phials are strong because the outer surface is in heavy compression, but compensating this, the inner surface layer is in tension. (The phial is held inside a glass battery jar and then scratched inside by a hardened steel point. It explodes violently.)

These phenomena illustrate what we may call uncontrolled internal stress and, therefore, while interesting scientifically, are of no commercial importance. They do, however, point to the possibility of introducing a great increase in useful strength into what is commonly called a brittle material. Fortunately, glass is a material ideally adapted to quantitative photo-elastic studies by means of polarized light and a Babinet compensator. (Kodachrome moving pictures, taken especially for this occasion, showed various kinds of glass treated in various ways as seen by polarized light.) Studies over a period of some 15 to 20 years have resulted in the successful production of really strong glass. A piece of plate glass will readily support a substantial load.

Discovery in far-off interstellar space of what is probably ionized gas of the element titanium, a find astronomers say is likely to prove of tremendous significance in learning the content and nature of these nearly vacuous regions, has been reported to the Harvard Observatory by the Mount Wilson Observatory in California.

The find was made by Dr. Walter S. Adams, director of the Mount Wilson Observatory, and Dr. Theodore Dunham, a member of the staff, while they were conducting research on the ultraviolet part of the spectrum of the bright star Chi 2 Orionis.

Dr. Albert Einstein, the famed proponent of relativity and acknowledged leader of the science of mathematical physics, stands revealed on the records of the U.S. Patent Office as the inventor of a camera that snaps photographs with the proper aperture and exposure automatically determined.

He has applied the photoelectric cell, or “electric eye,” to cameras. Experts reading the patent specifications foresee the possibility that the invention will be practically and commercially important in the next few years.

This is the way the Bucky-Einstein camera works: Light from the scene or object being photographed comes into an auxiliary lens and falls on the photoelectric cell. There is a screen of varying transparency mounted in the main camera lens system that is moved in accord with the amount of light that the electric eye sees, letting more light fall on the photographic plate when necessary.

So far as can be judged, abstruse mathematical theory was not needed in designing the patented camera, but Einstein’s genius probably contributed largely to making it operate correctly.