A new scorecard, devised by analyzing Ebola patients from the most recent outbreak in West Africa, may help doctors quickly decide who needs additional care to survive the virus in future epidemics.

In the latest outbreak, which raged in Guinea, Liberia and Sierra Leone from 2014 to 2016, 28,616 people were infected with virus and 11,310 people died. Doctors might be able to improve the odds of surviving by looking for a few warning signs in people who need to be treated more intensively, Mary-Anne Hartley, of the international charity GOAL Global and the University of Lausanne in Switzerland, and colleagues report February 2 in PLOS Neglected Tropical Diseases.

“It can be very difficult to avoid bias when choosing which Ebola patient should be given extra care when you have limited time and resources,” Hartley says. “Should it be that sweet 7-year-old girl in the corner with a bad cough or the really athletic 45-year-old man who was a bit confused earlier? Our score suggests that it should be the latter.” 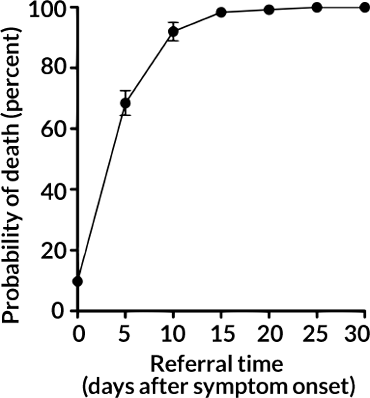 People who sought treatment soon after symptoms of Ebola appeared were more likely to recover from the infection. For each day treatment was delayed in the first 10 days of the illness, a patient’s chance of dying rose 12 percent.