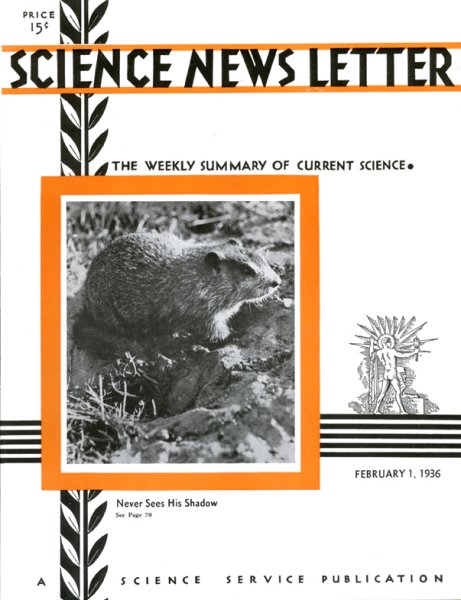 Groundhog Day is one of those curious superstitions that persist even after they have been well discredited and generally disbelieved. Probably nobody thinks that 6 more weeks of winter will ensue if the sun shines on the morning of February 2, but everybody talks about it in terms of the gravest belief. It has become one of those straight-faced public jokes that is almost a public ritual.

The assumption is always made, of course, that if the sun shines the groundhog will really see his shadow. As a matter of sober zoological fact, the groundhog never sees his shadow on the morning of February 2, though the winter sun should shine brighter than it does in June.

The reason is that the groundhog simply isn’t there to see any shadow. The groundhog is a hibernating animal, and he sleeps soundly in the innermost recesses of his burrow until about the end of the first week in March, and even later in the more northerly portions of the country. The very earliest record of an observation of a groundhog is a February 7 date in the Middle South—5 days too late for Groundhog Day shadow-observing purposes.

Dentists all over the country are visiting their druggists. They are buying three things: thymol, ethyl alcohol, and sulphuric ether. These are the ingredients of the new Hartman formula that takes the pain out of tooth drilling.

Announced by Prof. Leroy L. Hartman, professor of dentistry in the Columbia University School of Dental and Oral Surgery, the new pain-killer is applied to the dentin of a tooth, lying just below the enamel, and makes possible drilling of a cavity without feeling on the part of the patient.

A new optical material which promises to save thousands of lives now snuffed out in night driving because of headlight glare is announced by the Land Wheelwright Laboratories, Boston.

Known as polaroid, the new material is also to be used for sun glasses which take away light dazzle without darkening the view and, even more important, make possible motion pictures in three dimensions that have the optical illusion of depth similar to viewing a scene with the naked eye.

Other uses promised include one-way glass for cross-court privacy in apartment buildings, and also for brilliant building exteriors that change color as one walks by.

Polaroid resembles a sheet of glass but has the ability to polarize the light which passes through it. Now ready to be produced in unlimited quantities, the new material is the first practical use of what had formerly been a laboratory and research phenomenon.