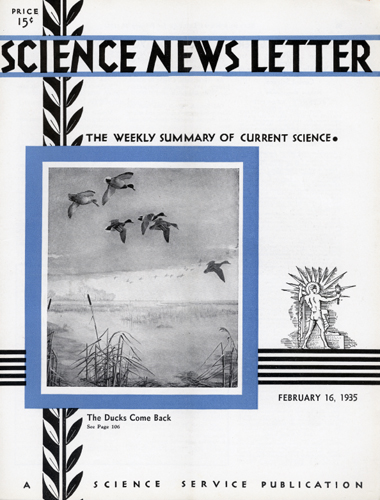 Wild ducks, flying northward this spring toward their nesting grounds, will sail over a land that has been dedicated to a New Deal for them and for all their wildlife neighbors in feathers and fur. Not only the “forgotten man” is getting some kind of a break, but also the hunted and harried bird and beast. The government is “doing something for the ducks.”

It is high time, too. Our national assets of wildlife are at as critical a point as were our national assets of cash and credit, in those memorable few days when President Roosevelt, remarking that what was needed was “action, and action now,” proceeded to take drastic steps to pull our drifting economic craft away from the rocks that seemed within an inch of wrecking it. There is a run on the First National Bank of Wildlife at exactly the time when its living assets, partly as the result of past bad policy, partly through unforeseeable natural disaster, are at their lowest ebb. Something must be done, and done quickly, not merely to hold our stocks at their present poverty level, but to increase and restore them to something like their one-time opulent state. It can be done, but it must be done today, and not tomorrow.

The Rosetta stone of the Mayan hieroglyphs now revealed is a 300-year-old booklet by a forgotten Spaniard. In it are 40 Mayan signs translated into Spanish.

Now, archaeologists expect to go to the famous unread Mayan stela or calendar monuments that dot Yucatan and other Central American areas, and begin more successfully to unravel their unread history. Dates and figure signs have been known in the past, but the writing has remained tantalizingly uncertain.

Long exposure to loud noise, such as boilermakers experience in the course of their work, causes deafness by damaging part of the hearing apparatus known as the organ of Corti. Strangely, however, the part of the organ most damaged by loud, high-pitched tones is not the part that picks up faint sounds of that pitch, a group of investigators at Harvard and Clark universities has found.

The investigation, which gives new knowledge both of a cause of deafness and of the little-understood mechanics of hearing, was made by Drs. Hallowell Davis, Moses H. Lurie, Morgan Upton, and Arthur J. Derbyshire of Harvard and Dr. Edward H. Kemp of Clark.