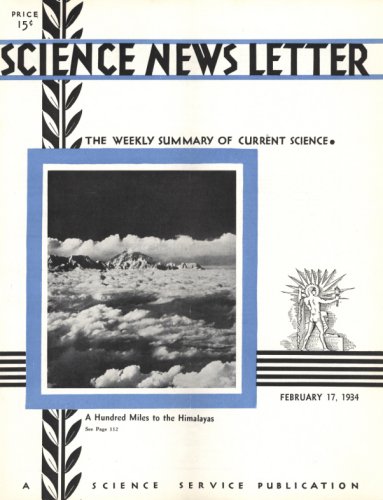 The world’s highest mountain continues to baffle climbers, but the very first expedition that marshaled its forces to fly over this highest tip of land won success. Before the flight came months of patient preparation. One main result, aside from the thrill of achieving a great adventure, is a map strip 20 miles long and less than 2 miles wide, based on the vertical photographs taken during the flight. Everest has been mapped at last. The air photographs are extraordinary, including such remarkable views as the Himalayan peaks seen from a distance of 100 miles, using infrared photography.

Extensive blood tests carried out on Indians of British Columbia by Prof. R. Ruggles Gates of King’s College, London, and Dr. G.F. Darby, bring fresh evidence showing close relationship of the American Indians to certain tribes found mainly on islands of the Siberian coast, such as the Giliaks of Sakhalin.

The latest subatomic entity to be discovered can now claim the honor of being the shortest-lived thing in the universe. It is the positron, fundamental particle of matter, complementary to the more familiar fundamental stuff of electricity, the electron.

The story starts when Prof. P.A.M. Dirac as a result of abstruse mathematical calculations predicted the anti-electron or positron, as scientists now call it. Prof. Dirac is the 31-year-old mathematical physicist, British despite his French name, who last fall was honored with a half-share of the 1933 Nobel prize in physics.

The positron would be born of radiation, Prof. Dirac foretold. But its life would be short. It would be immediately absorbed by surrounding matter and die giving birth to new radiation.

If water were the absorbent, the interval between these two events, he estimated, would be of the order of a billionth of a second—longer if the absorbing matter were rarer, shorter if it were denser. Only in interstellar space far removed from all other sorts of matter could the positron live to a respectable old age. Its extremely short life under terrestrial conditions explained, he said, why it had never been detected.

The precise manner of a positron’s death was also predicted by Prof. Dirac. If it encountered a free electron, both particles would be annihilated and give rise to two photons or gamma rays traveling in opposite directions, of a total energy of a million electron volts—the energy equivalent of the matter destroyed. If it encountered an electron firmly bound to the nucleus of an atom, only the positron would be annihilated, and one photon would be emitted of half-a-million volts.

So fantastic this theory seemed at the time it was promulgated, that physicists doubted if Prof. Dirac himself believed it. But a year ago last August, Dr. Carl D. Anderson of the California Institute of Technology discovered the positron, and since then it has become a very active member of the growing family of atomic components. Evidence has been obtained by Skobeltzyn of Leningrad and others, that positrons are born of radiation and consequently are not pre-existing fragments of the atom that are simply knocked out, as electrons are, by the impinging radiation. And now Prof. F. Joliot and Prof. Jean Thibaud, two French physicists, have reported in simultaneous but separate communications to the French Academy of Sciences, evidence that the positron dies when absorbed by matter in the precise way that Prof. Dirac described.