WHAT BABIES THINK ABOUT 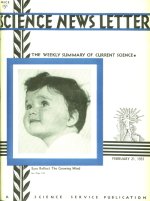 What are baby’s secret thoughts? Babies understand what is said long before they are able to speak, psychologists have discovered. Wherefore, parents are reminded to think before they talk in front of even very young infants and to count to 10, or 110, before indulging in a family tiff while the baby looks on.

“Blissful as a babe” may not be so blissful as commonly supposed, some of the modern evidence shows. If the babe in mind happens to be less than a month old, the chances are especially against his being a really contented creature, for the moment, Prof. Charlotte Buhler concluded from her studies of children in the clinic of the University of Vienna. She based her conclusions on the things the baby turned toward as if to reach and the things it turned away from as if to avoid. Food appeared to be the only solace of the very young child, whereas he found a variety of things strange and frightening.

As the child develops, the world becomes a less strange place and consequently more pleasant. Pleasure derived from the mastery of a new life adjustment was strikingly illustrated by the antics of a child learning to stand.

This child in the Vienna laboratory was so happy in his newly learned accomplishment that he would not lie down to go to sleep and actually went to sleep standing. When the child was awakened by the nurse’s attempt to lay him down on the bed, he showed signs of anger and insisted on struggling to his proud, upright position again.

The front cover illustration was chosen as typifying the spirit of the growing child. It is one of 32 excellent photographs taken by Hedda Walther and published in Paul Eipper’s book Human Children. Copyright 1930 by the Viking Press, Inc., New York. Reproduced by permission.

For the first time, the flea has been definitely incriminated as a probable vector in the transmission of typhus fever in this country. Experiments indicating this have just been reported by Drs. R.E. Dyer, A.S. Rumreich, and L.F. Badger of the U.S. Public Health Service.

Typhus fever in the Old World seems to be of slightly different type from the disease in the New World, and is transmitted by the body louse. It has been called jail fever and ship fever and was very prevalent in jails, crowded barracks and ships, city slums, and wherever people lived in congestion and filth. The disease has never reached serious epidemic proportions in the United States, and for many years very few cases have been reported.

The fact that the disease occurred in people who were not infested with lice led American investigators to suspect that some other insect was transmitting typhus fever in this country.

MORE AMERICANS KILLED BY AUTOS THAN BY WORLD WAR

More lives were lost in the United States during the last year and a half as a result of automobile accidents than in the American Expeditionary Forces during a year and a half of the World War, a survey by statisticians of the Travelers Insurance Co. here shows.

During the last 18 months 50,900 persons were killed in automobile accidents in this country.