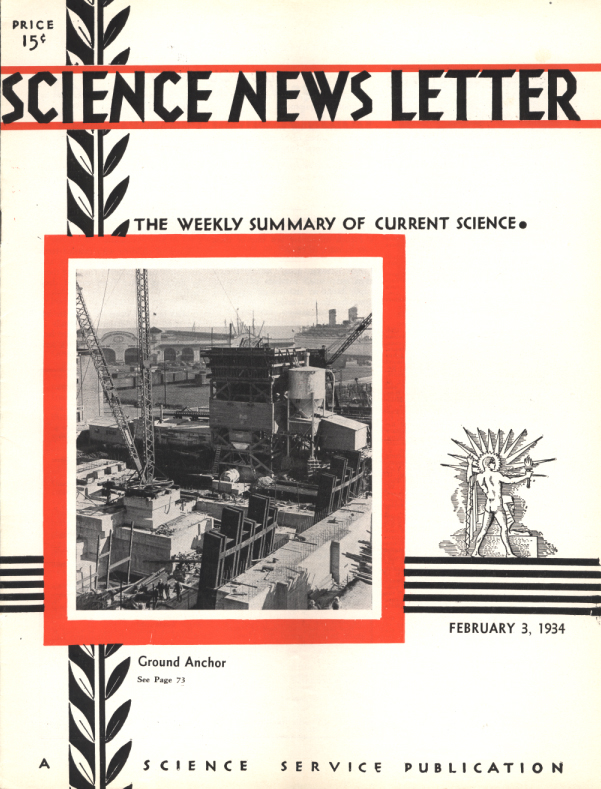 Curiously, radio is helping to build a bridge.

Special short-wave transmitting and receiving sets make possible communication among groups of contractors scattered on land and water along the eight-and-one-quarter-mile route of work on the San Francisco-Oakland bridge. These men on the job also talk with the head offices and with the office of the state engineer in San Francisco.

The picture of building activity on the cover shows the San Francisco anchorage for suspension cables as it rises to its full 68,000-cubic-yard stature. Steel grillage and eyebars, to which the 28-inch diameter cables will be attached, are being embedded in the concrete. The monolith will be 160 feet high, 108 feet wide, and 184.6 feet long and is being cast sectionally in interlocking blocks to offer greatest resistance to the pull of the cables.

The bridge is to be a two-deck suspension structure with steel towers rising from 465 to 505 feet, which will give boats clearance at high water of from 180 to 214 feet. The upper deck will carry a 58-foot roadway with six traffic lanes for passenger automobiles and light trucks, while the lower deck, 31 feet wide, will bear three traffic lanes for heavy trucks and two for interurban cars.

A tunnel 540 feet long, 80 feet wide, and 60 feet high is a part of the project. It pierces government-owned Yerba Buena island in San Francisco Bay. Anchorages, piers, tunnels, and other features of the project are under construction.

The discovery that the surface of polished metal is liquid promises to lead to a new method of metallic plating. This advance may result from a few seconds of startled watching of the picture thrown on a screen by an “electron microscope.”

In a few fleeting moments, Prof. G.I. Finch and two young research students, Dr. A.G. Quarrel and J.S. Roebuck, at the Imperial College of Sciences, London, found definite proof of a hypothesis put forward many years ago by the late Sir George Beilby, the director of fuel research for the British Government during the World War.

Prof. Finch and his colleagues were working with a special type of science’s new instrument called the electron-diffraction camera. This wonderful “camera,” in which a stream of electrons throws an image on a fluorescent screen, in effect magnifies the object 30,000,000,000 times, compared with the 2,500 or 3,000 times of ordinary microscopes.

They were experimenting with a piece of polished copper that was being bombarded with particles of zinc emitted from a zinc wire rapidly heated in a vacuum by an electric current. Many times before similar experiments had been made, the scientists studying the shapes of crystals thus deposited on metal surfaces. But this happened to be the first time that the bombarded metal had been polished.

As usual, a diffraction pattern was shown on the fluorescent screen–a score or more of bright circles. But to the intense surprise of the watchers, this pattern gradually weakened, became less bright, and within 3 seconds had completely disappeared. They tried again. A second, a third, and a fourth film of zinc was projected onto the copper. Each disappeared in the same way as the first, but each diffraction pattern lasted longer than the preceding one, until the twelfth pattern remained–meaning that the twelfth layer had stood fast.

Flying machines with rotating wings will be superior to the conventional airplane as soon as their possibilities for high speed are practically developed. John B. Wheatley, aeronautical engineer of the National Advisory Committee for Aeronautics, predicted to the Society of Automotive Engineers.

The autogiro and the gyroplane are the two types of rotating-wing aircraft that, according to Mr. Wheatley’s analysis, have the possibility of becoming superior to the conventional type of fixed-wing airplane now widely used. The reason for the pronounced possibility of the autogiro and the gyroplane is the inherent ability of their rotors or moving wings to attain their maximum lift-drag ratio at any desired forward speed.

The novel cyclogiro, with the paddle-wheel wings, is rated by Mr. Wheatley as being approximately equal in merit to the airplane, while the helicopter is definitely inferior.

The autogiro is the best known of all rotating-wing aircraft. It was invented by Juan de la Cierva, and the American version of the autogiro, which has been flown extensively in this country, was produced by Harold F. Pitcairn, working with the Spanish inventor.