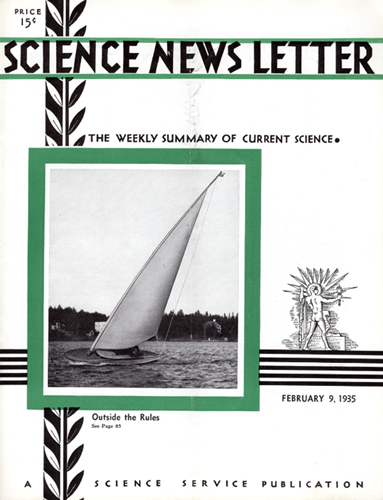 NEW-TYPE SAILBOAT IS MINUS FORESAIL, BOOM, AND STAYS

Page the Ancient Mariner! Yachtsmen of Stockholm are discussing a new type of sailboat without foresail, boom, or stays; a craft so fast that it has beaten larger rivals in recent tests. Yet it is so simple to handle that the yachting experts expect the rules of small-boat racing may be changed to take advantage of certain of its novel principles.

Invented by Dr. Fredrik Ljungström of the Academy of Engineering Sciences, Stockholm, the new type of boat has a revolving mast on which the mainsail is wound up like a window shade on its roller.

To reduce sail area, as in orthodox reefing, the navigator simply turns a wheel at his elbow in the cockpit and rotates the mast by a system of ropes. Ball bearing rollers in the foot of the mast below decks make this rotation easy.

The mainsail is triangular but double. Running before the wind, the double sail opens out into what looks like a great parachute jib sail. For tacking into the wind, one sail lies smoothly on top of its mate.

Aerodynamic streamlining is achieved in the sail by having its forward edge fixed in a slot on the bow side of the 46-foot pine mast. Thus, there is no gap between the mast and sail as in ordinary craft.

As the sail fills, its general shape resembles an airplane wing: thick and round at the front and narrowing off behind.

The only stay on the boat is tiny wire running from the tip of the mast to the stern. Such a lack of stays may arouse yachtsmen’s suspicions, but Dr. Ljungström has sailed his boat in heavy weather with excellent results.

The lack of stays is one reason for the speed of the boat. Stays—the fixed rigging which keeps the mast in position—have more wind resistance than is sometimes commonly believed. Although the surface area of the wires may be small, they vibrate in the wind and hence greatly increase their resistance to a breeze.

Using a new, experimental photographic plate, the Mt. Wilson Observatory astronomers have thus extended the observational limits of the 100-inch telescope approximately a third as far again as the previous record.

The nebula just discovered, whose estimated distance is 500 million light-years, to use the yardstick of the astronomers, is traveling through space outward at the amazing rate of 50,000 miles per second, which is more than a quarter of the 186,000-miles-per-second speed of light, fastest speed in the universe.

Thousands of bacteria on the rims of supposedly clean, germ-free drinking glasses—as many as 50,000 to 100,000 bacteria on a single glass—were discovered by Prof. W.L. Mallmann and E.D. Devereux, research associate, of the Michigan State College.

These bacteriologists have been investigating the sanitary condition of glasses at roadhouses, taverns, and saloons in cooperation with the Lansing Department of Health.

“The possible role of eating utensils as a factor in the transmission of disease has been demonstrated from time to time over a period of years,” they said in explaining their scientific report made to the Society of American Bacteriologists.

Tableware has been shown to be a carrier of the organisms causing diphtheria, pneumonia, and tuberculosis and of two kinds of dangerous streptococcus “germs,” they pointed out.