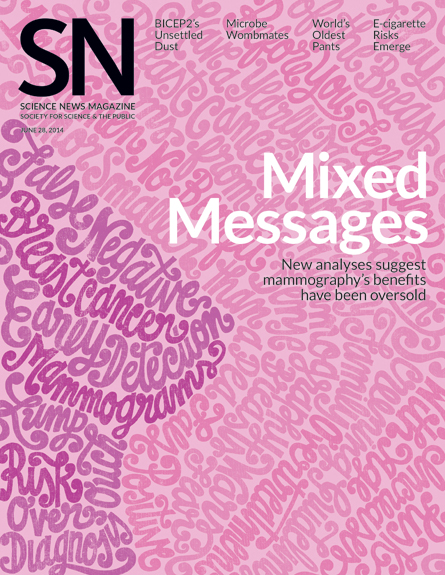 Guidelines for breast cancer screening are being questioned as new research reveals the pitfalls of mammography as a screening tool. Laura Beil discussed false positives, overdiagnosis and other concerns regarding cancer detection in “To screen or not to screen” (SN: 6/28/14, p. 22).

Readers responded passionately, sometimes angrily, to the idea of reducing screening recommendations or doing away with mammograms altogether. As with many health care debates, talk turned quickly to money. “So it is OK to spend multibillions examining space noise so ‘something’ might be found, but not to X-ray a human female for a few dollars so that something possibly life threatening might be found?” asked J.D. Vaught.

Mariana Tupper took umbrage at the statement that mammography harms lives. “It is important to distinguish between the test and the interpretation,” she wrote. “How we understand the results, and what we choose to do about them, are perhaps the riskiest part of having a mammogram.”

Many readers agreed with doctors cited in the article who emphasize allowing women to make informed choices, but some lamented the lack of screening options. “I will always choose more information over less, so yes, I want to know what’s going on in my body and I’ll decide how to deal with it after doing my own research,” wrote online commenter K2. “What disappoints me is that after all these years, mammography is still the mainstream way to screen for breast anomalies.” While other imaging techniques, like MRI and ultrasound, can detect tumors in special cases, there is currently no good alternative to a mammogram.

“There is no perfect screening test,” wrote online commenter dkopans. “Mammography is not the ultimate answer to breast cancer, but it is saving lives today and women should not be denied access to its benefits.” In the end, each woman has to weigh the options. “Always good to know stats, but I think I’d still test,” tweeted Grace Nyakabau.

More carbon pollution in the air could mean lower levels of iron, zinc and protein in staple crops like wheat and rice, Beth Mole wrote in “Nutrients may drop as CO2 rises”
(SN: 6/28/14, p. 12).

The startling finding calls for a plan B, said Mark S. “Iron and zinc are fairly inexpensive as food additives. Since it’s clear that nothing is going to be done about climate change until it’s too late, maybe the countries that benefit most from the status quo could set up a program to provide supplemental nutrition to those countries that need it most.” 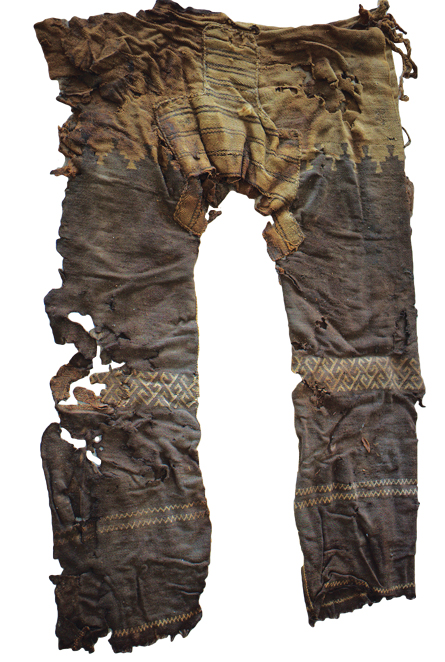 “So glad he hung on to those; that fashion’s bound to come back in sometime this millennium.”
— @safzoro on Twitter

But online reader Dan Midgett urged people not to jump to conclusions based on the researchers’ work. “We’re not considering plant health here. Other studies have shown that elevated levels of carbon dioxide are great for the majority of plants that grow greener and better at gas levels several times higher than current provided they have the water and other basic nutrients to do so.”

The finding implies that there might be yet more social impacts of the financial climate, e-mailed Henry Jones. “If recessions cut down on excessive self-regard, do they have an opposite, and much less desirable, effect at the other end of the scale, i.e., more cases of very low self-esteem?”

Online reader arobustus, however, reminded everyone that correlation is not causation, and that the researchers are assuming that the economy does in fact have an effect on narcissism. “Could it be that increases in narcissism, due to some unknown cause, in their turn cause economic downturns later as the self-absorbed proceed to muck things up?”