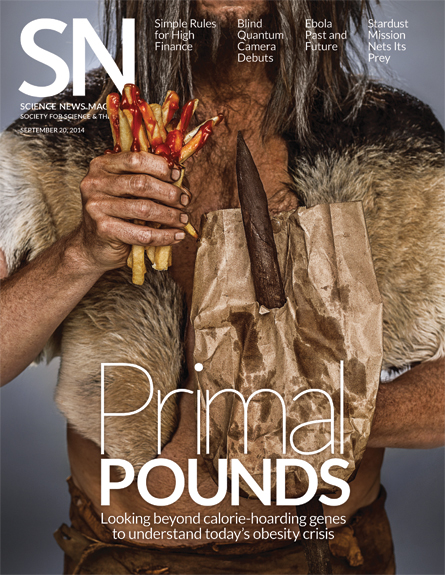 Ebola — airborne or not?

Two years ago (SN: 12/15/12, p. 12) an Ebola study stoked notions of a terror transmissible by air when pigs passed the virus to monkeys. Tina Hesman Saey reported in “Airborne transmission of Ebola unlikely” (SN: 9/6/14, p. 7), though, that the phenomenon may be more thriller than threat.

The story reminded a few readers of a high-profile U.S. outbreak, when a variant of the virus appeared in lab monkeys imported from the Philippines. “Didn’t the Reston, Va., Ebola outbreak of 1989 show evidence of aerosol transmission?” asked Ken Jordan.

Much confusion about the issue stems from a failure to define terms, Saey says. “Airborne viruses create clouds of tiny dried particles containing the virus. These particles may hang in the air for relatively long periods of time,” she explains. “People can contract such a virus by breathing it in. Those aerosols are different from the much larger mucus droplets sprayed by coughs or sneezes, which don’t travel far before falling out of the air onto surfaces. People can catch the virus by touching a contaminated surface and then touching their nose or mouth. If someone with Ebola sneezed right in your face, droplets might land on your mucus membranes and infect you, but that is not airborne transmission.” Ebola is not an airborne infection. It spreads by direct contact with blood, vomit and other body fluids.

Laura Beil’s “Ancient genes, modern meals” (SN: 9/20/14, p. 18) looked into the debate surrounding calorie-conserving genes — a component of a popular obesity narrative that pits our species’s genetic past against its dietary present.

William Grant defended the idea of “thrifty genes” by citing research on a protein-making gene called APOE. A genetic variant of APOE promotes fat storage, he wrote. “Hunter-gatherer peoples such as Pygmies have a high prevalence of this allele” — an adaptation theoretically connected to lasting long stretches without food.

“Body weight certainly has a genetic component,” Beil responds, “but it’s a product of perhaps hundreds, if not thousands, of genes. No single gene is responsible for the whole physiological response to an environment. Also, the correlation with hunter-gatherer societies doesn’t necessarily have anything to do with starvation. Despite the common assumption that hunter-gatherers were more prone to food shortages, the evidence is not clear this is the case.”

In the article, Seppa wrote that “suppressing immunity amid an infection is ill-advised.” John Hereford took issue with that statement, drawing on his own observations as a medical laboratory technician involving cases of spinal meningitis that triggered septic shock. “I saw young teens, with healthy immune systems, alert and walking into the ER, only to expire in the next three to four hours,” he wrote. He concluded that immune suppression may be exactly what is needed in some cases, if inflammation and not the bacterial infection poses a greater risk.

Treatment is tricky, says study coauthor Shannon Turley of Harvard Medical School. “You don’t want to completely dampen or eliminate patients’ immune systems. They have bacterial infections. You want to modulate immunity but not by completely wiping out the immune system of the patients, or they’d really be in trouble.”