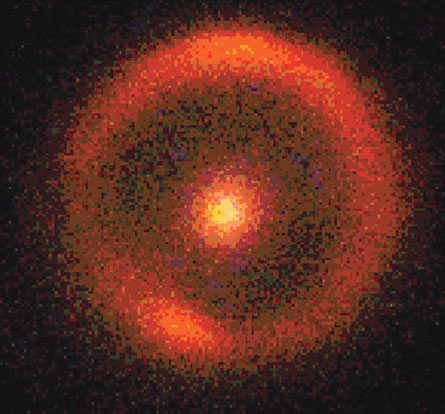 Anything that has a gravitational pull — stars, galaxies, and even dark matter — can bend light passing by, distorting the image of the light’s source that is seen on Earth. Scientists can use this distortion to look for objects that would be too dim to see otherwise by picking out anomalies in deflected light. An international team of researchers noticed just such a disturbance in the bright halo (shown) created by the supermassive elliptical galaxy JVAS B1938+666 as it warps the view
of a more distant galaxy. Further investigation led to the discovery of a satellite dwarf galaxy located nearly 10 billion light-years from Earth, the researchers report in the Jan. 19 Nature.