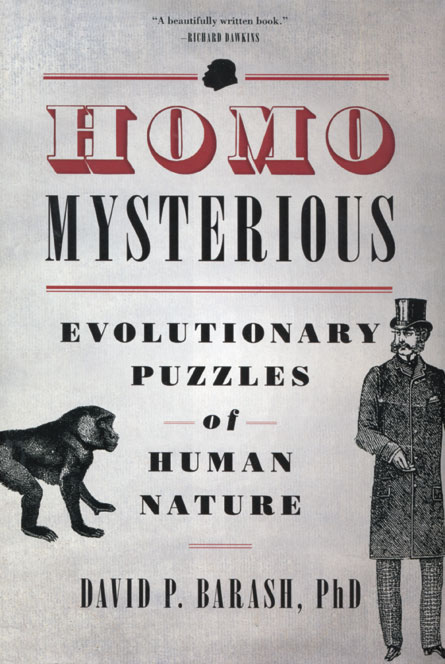 Through an evolutionary lens, this book explores proposals — probable and improbable — that seek to explain the mysteries of human biology and behavior. Looking at questions such as what adaptive advantages, if any, human ancestors might have gotten out of developing the mental capacities for art, Barash provides no pat answers. Instead, he delights in all that remains unknown and unexplained.

Among the most interesting questions is why women’s ovulation is concealed not only to potential partners but also to women themselves. Barash describes one theory that posits hidden ovulation could give women more control over choosing a partner and when to mate. Other biological “puzzles” explored include breasts, female orgasm and homosexuality.

Barash, an evolutionary psychologist and biologist, then delves into how the human urges to create art and religion might have evolved. Fiction’s appeal, for example, may have arisen from the human capacity for play. Both offer low-risk opportunities to learn about social rules. The emergence of human brainpower, he writes, might be linked at least in part to the development of cooking, or so one theory proposes.

Of course, not all that makes humans distinct is necessarily advantageous: Some traits may have simply persisted, accidental stowaways on evolution’s journey. At its best, Homo Mysterious poses fascinating questions, and the potential answers are often informative. At its worst, the book speculates, never coming to a satisfying conclusion. But that, Barash argues, is exactly what makes these mysteries.