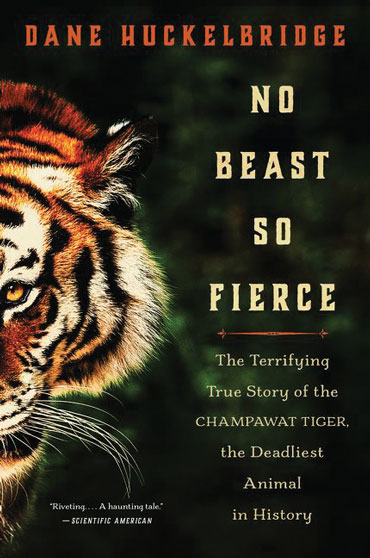 At the heart of No Beast So Fierce is a simple and terrifying story: In the early 20th century, a tiger killed and ate more than 400 people in Nepal and northern India before being shot by legendary hunter Jim Corbett in 1907. Rather than just describe this harrowing tale, though, author Dane Huckelbridge seeks to explain how such a prolific man-eating tiger came to be, taking readers on a fascinating journey through the natural history of a tiger and the political history of Nepal and northern India.

Perhaps the first surprise is that Huckelbridge actually elicits sympathy for the tiger. This big cat, known as the “Man-Eater of Champawat,” was not born with a taste for human flesh. The beast, when it was still fairly young, had some sort of encounter, probably with an unsuccessful hunter, that severely damaged the cat’s mouth and caused the loss of two canine teeth. With that handicap, the Champawat tiger probably had to switch from hunting water buffalo and other large ungulates to easier-to-catch prey — humans — as a means to survive. This scenario is fairly common among man-eating big cats, Huckelbridge notes; we humans usually aren’t meals until a cat is somehow forced to turn us into dinner.

But to understand how the tiger racked up such an impressive number of kills — 436 deaths over some seven years — one has to consider how the landscape of Nepal and India had become less hospitable to wildlife. As the British colonized the Indian subcontinent in the 19th century, prime tiger territory was destroyed to make way for people and agriculture. The loss of habitat forced many tigers to compete for land and prey, and the Champawat tiger, with its physical disadvantages, would have been unable to prevail without turning to humans. “What becomes clear upon closer historical examination is that the Champawat was not an incident of nature gone awry,” the author writes, “it was in fact a man-made disaster.”

And by the time the tiger was sneaking through the brush and snatching (mostly) women and children, the British had long banned Indian people from owning any sort of weaponry that might have allowed them to take on the beast. By the time anyone with appropriate weaponry could be summoned to help, the tiger would have moved on, Huckelbridge explains. Corbett, therefore, is presented not so much as some colonial savior but as the man who had permission to own a gun. He still gets credit for being determined enough to follow the cat from one village back to the animal’s home base. Corbett was also smart enough to enlist the much-needed help of a traumatized populace to finally bring down the beast that had been stalking people for years.

Corbett’s hunt is given sufficient room in the tale to satisfy readers who want details of the bloody kill. But it is somewhat anticlimactic, a sad end for a sad creature that had to be killed not because it was evil but because it was hungry. And the Champawat tiger was hardly the only man-eater created out of the Indian subcontinent’s environmental and historical conflicts at the time; Corbett killed more than 30 of these troublesome, and troubled, tigers and leopards.

What the story of the Man-Eater of Champawat means for today’s tigers is given shorter shrift than many readers might like. Fewer than 4,000 wild tigers exist in the world today, and their future remains uncertain.

Perhaps Huckelbridge dwells little on this challenge because there are no easy answers for how to move forward. “We’ve arrived at the point, it seems, where all can agree that tigers need to exist,” he writes. But how to live with creatures that can devour us is something that communities still struggle with today.

Buy No Beast So Fierce from Amazon.com. Science News is a participant in the Amazon Services LLC Associates Program. Please see our FAQ for more details.

Editor’s note: This story was updated March 19, 2019, to clarify that the fewer than 4,000 tigers statistic refers to tigers in the wild.