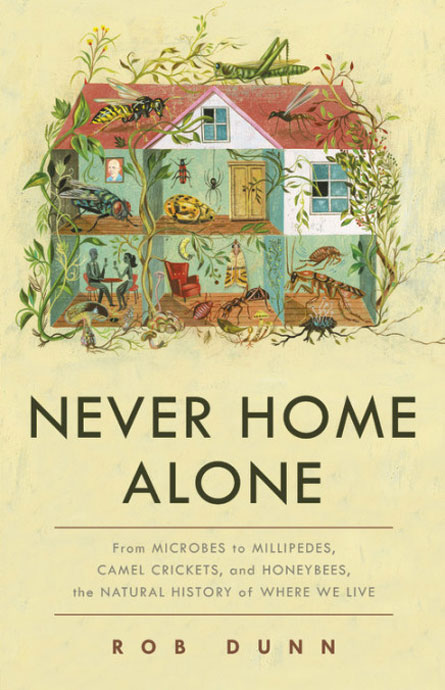 As I write this in my basement office, a sticky trap lies beneath my desk catching whatever insects wander by. Its current haul is pretty typical: a cricket, a spider and some small flies. But as Rob Dunn writes in his intriguing new book, Never Home Alone, I’m missing a lot if I think that’s all that lurks beneath my slippers.

Dunn has carved out an unusual niche as an ecologist, studying the myriad fauna that inhabits houses. These creatures are mostly small, such as microbes and insects, but that’s only one reason they’ve gone largely undocumented.

There’s also a bias worth noting. “As ecologists, we’re trained to study life in ‘nature,’ which we have come to believe means the absence of humans,” Dunn writes. But it’s impossible to know what harmful or helpful species might live alongside us, he argues, if no one ever looks. So as Dunn relates in this backstage pass to his work, he and a team of fellow renegades set out to catalog life in unnatural spaces.

The team immediately found surprises. In their first look at house dust, Dunn and colleagues identified almost 8,000 bacterial species, including many new to science. What’s more, an average home had about 100 species of arthropods (SN: 9/3/16, p. 15). The team also revealed that a giant species of Japanese camel cricket had invaded American homes without anyone noticing. And that was just the beginning.

In shower heads, Dunn’s group discovered an entire ecosystem. There were dozens of species of Mycobacteria, some of which can cause diseases including tuberculosis and some of which might impart health benefits. Alongside these microbes live predatory swimming bacteria, multicelled protists that eat the swimmers, and tiny worms that eat the protists. “This is the food web that falls upon you as you bathe,” Dunn writes.

In their searches over the last several years, Dunn and colleagues have found about 200,000 different species in homes.

If your skin is starting to crawl at the thought of all these uninvited houseguests, don’t despair. Most are harmless, or even helpful, Dunn has found. To that end, he’s not only identifying who’s there, but also asking what they’re doing there, and if they might be useful in some way.

Some have potential, he’s learned — even the camel cricket. By considering the insect’s ecology — camel crickets typically live in caves, where food is scarce and difficult to digest — Dunn reasoned that bacteria in the cricket’s gut may help it break down scraps of detritus. And in fact, he and colleagues have identified bacteria from the camel crickets that could perhaps break down industrial waste. Who knows what talents may lie in silverfish or drain flies?

Seen through Dunn’s curious eyes, a house becomes not just a set of rooms, but a series of habitats to be explored. His writing and research lend a new appreciation of what many of us consider pests.

For the most part, it’s our fight to sterilize our homes that’s actually harmful, Dunn argues. Chlorinating tap water kills off many “good” bacteria to the benefit of harmful ones, and our efforts to exterminate the German cockroach have served only to create ones that are harder to kill.

Rather than trying to seal everything out, Dunn says, we should welcome a little bit of nature into our homes. Open a window and enjoy the abundance of life.