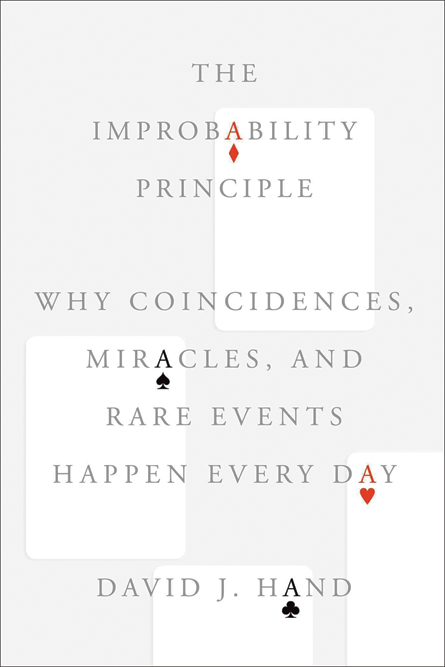 Do these chance events validate superstition or suggest a hidden influence in our world — a higher power, perhaps? Absolutely not, argues Imperial College London statistician David J. Hand. The laws of mathematics and physics suffice to explain a world of coincidences.

Hand weaves his principle from several strands dubbed the “law of inevitability,” the “law of truly large numbers” and others. Essentially, he argues that because so many things happen, and because we are biased toward noticing unusual events, we should not be surprised when an occasional startling coincidence emerges from a sea of ordinariness. Instead, we should be surprised if one doesn’t.

In making his case, Hand devotes much space to debunking fallacies such as ESP-proving experiments and Carl Jung’s “synchronicities.” He also really likes dice. But if you’re not a gambler and already assume a rational universe, you may wonder how the improbability principle might apply to more pressing societal problems.

Here Hand offers a few tantalizing examples: a mother exonerated by statistics after being convicted of double infanticide; CEOs whose swiftly appreciating stock options were found to have been postdated to just before a dramatic price increase; the unsettling frequency of stock market crashes. But more would have been welcome.

Hand also seems forever worried that his reader will forget the previous chapter’s exposition, leading to much repetition. Still, his informal style, wide-ranging curiosity and knack for elucidating complicated mathematics make the book an enjoyable — and mostly convincing — read.