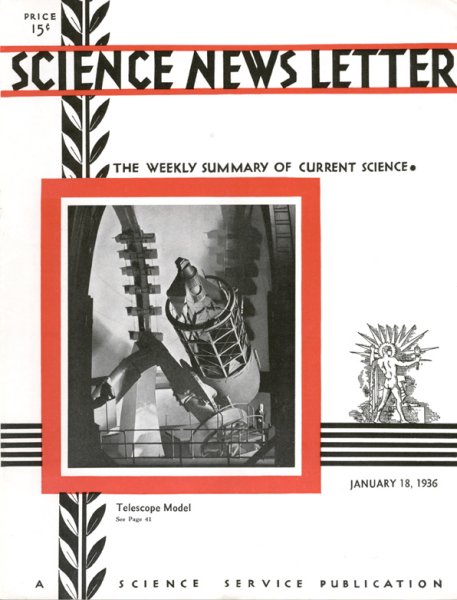 A model of the 82-inch reflector telescope and the towering structure now being constructed for the McDonald Observatory atop Mt. Locke in west Texas was shown at the meeting of the American Association for the Advancement of Science.

“It would be hard to find any more eloquent example of the interdependence of the exact sciences than is represented in this telescope,” said Warner Seely, secretary of the Warner and Swasey Company, which designed the instrument. “The precision in design, construction, and operation of a telescope may be more obvious because of the distances involved, but the exactness which modern industry demands of machine tools is no less than that which science expects of its most delicate instruments.”

The telescope will be one million times more powerful than the naked eye. Its 3-ton mirror will have a concave surface approximately 1 3/8 inches deep coated with aluminum 1/1,000,000 of an inch in thickness. No deviation from a true paraboloid greater than 1/1,000,000 of an inch can be permitted on the mirror’s surface.

The photograph of the model appearing on the cover of this week’s Science News Letter was taken by the Warner and Swasey Company.

Quick relief for the world’s most painful and most rapidly increasing disease, angina pectoris, has been achieved by the simple inhalation of the chloroform-like drug called trichloroethylene, Dr. John C. Krantz Jr. of the University of Maryland School of Medicine, Baltimore, reported to the meeting of the American Association for the Advancement of Science.

Patients with the fear of death upon them, dreading the next seemingly inevitable attack of the excruciating heart pain that is said to be worse than childbirth or gallstones, get relief in a second from inhalation when the attacks occur.

As a routine treatment night and morning, crushing an ampule in a handkerchief makes attacks less frequent by a half or third. Clinical tests made by Dr. William Love Jr., Baltimore physician, were successful in 15 out of 20 cases.

LIGHTEST SOLID EVER FOUND MADE AT BARTOL LABORATORIES

The lightest solid material ever made by man or found on Earth has been produced at the Franklin Institute’s Bartol Research Foundation laboratories at Swarthmore, Pa.

This lightest solid is less than twice as heavy—atom for atom—as the gas helium used by the U.S. Government to inflate its airships.

The production of the world’s lightest solid was achieved by Dr. L.H. Rumbaugh, who used electromagnetic means in the Swarthmore, Pa., laboratories. Dr. W.F.G. Swann, director of the laboratories, gave the first hint of the achievement in a lecture before the New York Electrical Society recently. Only the merest speck of material has yet been attained but as the result of 4 years of research there is hope of ultimately concentrating, in usable amounts, the rare isotopic varieties of the elements.