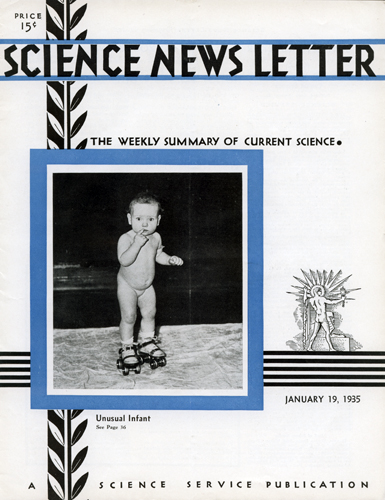 A 15-month-old baby climbing fearlessly up a high, steep incline, climbing unaided off stools as high as a grown person’s head, and beginning to navigate on roller skates was watched by a group of scientists, educators, and others at a demonstration of the remarkable effects of special psychological training at the Normal Child Development Clinic of the Babies Hospital in New York City.

Florie, the athletically trained baby, is one of little twin girls who are repeating the experiment of Jimmy and Johnny, the famous boy twins one of whom was trained to swim, dive, roller skate, and do other feats at an age when other babies are just beginning to toddle around. Her twin sister Margie, who looks so much like Florie that it is difficult to tell them apart, has been brought up without any special training and has had her activities restricted. Like Jimmy, the untrained boy twin, she was not able to do any of these stunts although given plenty of opportunity to try.

Florie is said by Dr. Myrtle B. McGraw, the psychologist who has trained her, to be in these respects more like the famous Johnny than she is like her own twin sister. The baby girls are otherwise very much alike and are probably what are known to scientists as identical twins, that is, they had their origin in one single cell. In appearance and other inherited characteristics they are so much like one another that even their parents sometimes confuse them.

Their remarkable differences in ability to do the athletic stunts is clearly a result of the difference in their training, Dr. McGraw believes.

Brain waves, electrical impulses accompanying brain activity, promise to allow physicians to probe harmlessly into the brain processes of healthy and ill patients in much the same way that heart function is now extensively charted in the familiar electrocardiographs.

The tapping for medicine of the electrical messages from the brain comes as the culmination of long years of research on the physiology of the brain and particularly the character of the electricity within the skull.

The latest work is by Drs. H.H. Jasper and Leonard Carmichael of the psychological laboratory of Bradley Hospital and Brown University, who followed up and confirmed in many particulars the researches of Dr. Hans Berger of Jena. The German scientist found that the changes in electrical potential connected with human brain activity may be magnified by running them through a vacuum-tube amplifying system similar to that used in radios and then using the enhanced current to operate an oscillograph that writes in light on a photograph a wavy line corresponding to the fluctuations of the electricity in the brain.

TRIPLE-WEIGHT HYDROGEN MADE FROM LITHIUM ATOMS

New experiments in which triple hydrogen—three times as heavy per atom as the ordinary kind of hydrogen gas—is formed are reported from famous Cavendish Laboratory of Cambridge University.

The new discovery is the work of Prof. James Chadwick and Dr. M. Goldhaber. (Nature, Jan. 11).

The triple-weight hydrogen was formed in experiments where slow neutrons were passed through paraffin after being liberated by a source consisting of radon gas and the element beryllium. This is a common neutron source used widely throughout the world.

The slow neutrons thus formed were allowed to strike the light element lithium having atomic weight six. The neutrons have an atomic weight of nearly one.

The combination of lithium atoms and neutrons may, by one picture, form an unstable form of lithium of weight seven. This lithium seven explodes violently and forms a helium atom of atomic weight four plus a triple-weight hydrogen atom of mass three. Five million electron volts of energy come off in the explosion in addition, reported Prof. Chadwick and Dr. Goldhaber.