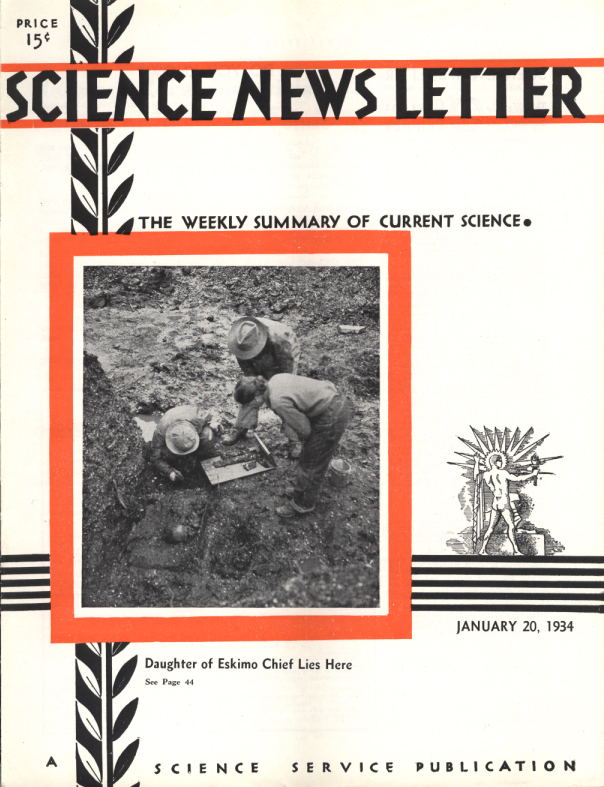 A girl of 20, almost toothless! This is the pathetic picture of prehistoric Alaska revealed in the skeleton of an Eskimo chief’s daughter.

The grave of the girl, discovered in southwestern Alaska by Dr. Frederica de Laguna of the University of Pennsylvania Museum, yielded the skeleton. An osteologist at the museum has examined the bones and pronounced the smooth surfaces of the joints typical of a young woman in the early twenties. But at the time of her death, only three or four teeth were in the upper jaw, and not many more in the lower jaw. The others had fallen out some time before, leaving her with the shrunken cheeks of an old woman.

The expedition, whose discoveries are now being studied at the museum, has been conducted jointly with the Danish National Museum represented by Dr. Kaj Birket-Smith.

The skull and horns of a giant bison that roamed over the hills of northern California about a million years ago have been found in Shasta County, near the town of McArthur. The discovery was made on the Jim Day ranch.

The fossil remains are now the property of the University of California museum of paleontology, where they are being studied in the light of our knowledge of present-day bison. Dr. C.L. Camp, director of the museum, states that the specimen is valuable because it is one of the very few in existence today. These animals were rare on the North American continent. Previous traces of their existence have been found mostly in the Great Plains area and in Alaska.

Science and the most modern business methods are serving as powerful weapons in Uncle Sam’s new drive on organized criminals, kidnappers, and racketeers. One of the most useful of these new defenses is a newly organized file at the Identification Unit of the U.S. Department of Justice.

In the drawers of this file are the fingerprints of known gangsters, kidnappers, and extortionists–each single fingerprint filed separately. The advantage of having each finger filed separately, instead of in sets of 10 as in the regular identification files, is that the search for a single print picked up at the scene of the crime, or found on a ransom note, perhaps, is made much easier by this system.

Suppose one print is found on one side of a sheet of paper or a bottle, and on the other side are noticed four smudges. Officials receiving this print may assume first that it is a thumb. Right-thumb prints are filed all together in this new single-print file; but not all are of the same pattern, and they are classified and filed by pattern, not by the criminal’s name.

Perhaps the “latent” print found on the paper has what is known as a loop pattern. That narrows the search to the loop classification. The direction the loop points, whether toward the little finger or away from it, indicates still another subclassification. The number of ridges in the loop limits the search still further. Finally, the particular section that must be searched for that type of print contains not more than about 25 cards. If not found there, the search would be continued among the left thumbs, and so on.

It is a comparatively simple task to search a bunch of 25 cards one by one until the “latent” print is identified. It would be a hopeless task to search the millions of prints in the regular files.